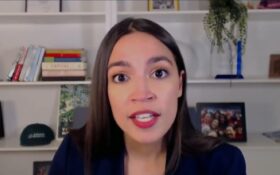 House Republican Leader Kevin McCarthy, R-Calif., is running for House speaker, but he failed again on Thursday… for the fourth and fifth time.

Rep. Alexandria Ocasio-Cortez, D-N.Y., has been watching McCarthy’s troubles winning over conservative representatives… and told the media she has a plan to snatch power from the “America First” caucus blocking McCarthy.

Ocasio-Cortez suggested the possibility of a “coalition government” in the closely divided House, and she’s been talking to some unlikely moderates from the opposing party.

Not even former President Donald Trump has been able to get the conservative roadblock to budge, despite personal appeals —

Lauren Boebert confirms she received a call from Trump telling her to “Knock it off”.pic.twitter.com/Nnj2bYrP43

Ocasio-Cortez says she might have the solution, and has been talking to the GOP’s Paul Gosar, an Arizona Republican representative.

One staffer for Fox News host Sean Hannity called the video a case of “strange bedfellows.”

On her floor convo with Rep. Gosar earlier, AOC tells me that McCarthy made claims within the GOP conf. that some Ds would walk away to lower the threshold. Gosar was asking AOC for clarification — would she walk away? “We would never do that,” AOC told me. Jeffries all the way. pic.twitter.com/yDsbJjFIPU

McCarthy himself reportedly speculated that he might win the speakership in the event of some Democrats’ absence.

In the video, Gosar was reportedly asking Ocasio-Cortez whether any Democrats would vote present to allow McCarthy to win the speaker job. Ocasio-Cortez said that the Democrats had committed to their own nominee for House speaker: Rep. Hakeem Jeffries, D-N.Y.

“We would never do that,” Ocasio-Cortez told a reporter for ABC News at the time. “Jeffries all the way.”

But later on MSNBC, Ocasio-Cortez spoke about the possibility of a “coalition government.”

She predicted that McCarthy could give concessions to Democrats to win the speaker role over the America First caucus roadblock.

“If not [McCarthy], then who? You have certain members of the Freedom Caucus who have, of course, nominated other people, but the rest of the Republican Party will not rally, I believe. They will not coalesce under [Rep. Jim Jordan. R-Ohio]. Jim Jordan himself doesn’t want it. They will not coalesce under someone like [Rep. Andy Biggs, R-Ariz.,” Ocasio-Cortez reportedly said Tuesday on MSNBC.

“Is there anyone in their caucus that can build that consensus?… If there isn’t, McCarthy’s team may have to come to the Democratic Party. And, if that’s the case, then what would that even look like? It’s rather unprecedented. Could it result in a potential coalition government? Could we get Democratic chairs of committees as a result? We don’t know.”

Some Democrats have expressed openness to voting for McCarthy simply to elect a speaker, any speaker.

Perhaps in a savvy political move, Ocasio-Cortez saved face and expressed doubts on McCarthy’s ability to reach across the aisle enough to win over Democrats.

“He failed as a coalition-builder, not once, not twice, but three times,” Ocasio-Cortez reportedly said on MSNBC. “We reconvene tomorrow morning. I’m not quite sure what he could or would do that would change the calculus between today and tomorrow.”