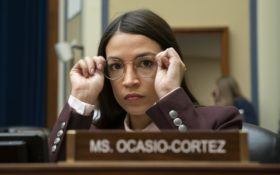 In the weeks since a woman accused Joe Biden of sexual assault, the mainstream media interviewed Biden around a dozen times and asked him more than 80 questions.

How many were about allegations from a female intern that he molested her inside the U.S. Capitol?

Not a single one — and it has even far-left Rep. Alexandria Ocasio-Cortez, D-N.Y., upset.

It’s been weeks since former Biden staffer Tara Reade accused the presumptive Democratic presidential nominee of pinning her down in a hallway, groping her, then inserting his fingers into her vagina.

Reade said when she protested, Biden said, “Come on, man, I heard you liked me.” When Reade resisted more, Biden told her, “You’re nothing to me.”

Her brother and two friends say that Reade told them about Biden’s roaming hands after she started in Biden’s office in December 1992. And two interns Reade oversaw were confused when Reade “abruptly stopped supervising them in April” 1993, The New York Times reported. She left Biden’s office four months later.

Reade, who supported Bernie Sanders in the Democratic primaries, filed a police report against Biden this month.

Don’t be embarrassed if this is the first time you’ve heard about it. The media have had a full-scale blackout, and Democratic leaders are trying to explain it away.

It’s a huge difference from the way they handled ludicrous-sounding allegations of gang-rape leveled against Supreme Court Justice Brett Kavanaugh.

Both alleged incidents happened decades ago. There were no eyewitnesses. But at least “it can be established that Reade knew Biden,” tweeted conservative writer Alexandra DeSanctis.

But that’s where the similarities in media coverage end.

Ultra-leftists treat the charges against Biden as a “he said/she said.” Feminist blogger Amanda Marcotte told three podcasters, “There’s not a whole lot more to the accusation.”

The podcast, which has the blasphemous name “Pod Save America,” is hosted by three former officials of the Obama administration: Jon Favreau, Jon Lovett, and Tommy Vietor

Barack Obama just endorsed his former vice president and let it be known he did not Bernie Sanders to win the nomination.

But the media have covered the Biden story like Democratic Party operatives.

Before he got into the Democratic presidential primaries, the Big Three networks—ABC, CBS and NBC—spent 26 minutes of their evening news broadcasts covering allegations that Biden touched, hugged, or kissed them inappropriately. But once Biden declared, they covered the allegations for another 92 seconds that week, then dropped it altogether.

And even though the Times, The Washington Post, and other major media outlets knew about Reade’s story last year, they sat on it until after Bernie Sanders withdrew from the Democratic primaries.

The Associated Press defended its blackout by saying it “declined to publish details of the interview at the time because reporters were unable to corroborate her allegations, and aspects of her story contradicted other reporting.”

But they published uncorroborated stories from Kavanaugh’s accusers.

The media also changed their story after it was published…to keep the Biden campaign happy.

When the Times finally covered the story—19 days after other reporters broke it—they wrote that they found “no pattern of sexual misconduct by Mr. Biden, beyond the hugs, kisses, and touching that women previously said made them uncomfortable.”

But the “newspaper of record” removed the reference to Biden’s well-documented history of unwanted physical contact with women, and girls, of all ages—because the Biden campaign asked them to.

Megyn Kelly, who accused her boss at Fox News of sexual harassment, responded to the Times‘ excuses for its coverage with two words: “Holy sh&t.”

At least the Times covered the story. The major networks had interviewed Biden 10 times by this Wednesday, but hadn’t raised the issue with him a single time.

The Washington Post reported that Reade had changed her story over the years—but it reported Christine Blasey Ford and Julie Swetnick’s “evolving” stories as fact.

The paper’s feminist columnist Michelle Goldberg called Kavanaugh and his supporters “Pigs All The Way Down.” But she said Reade’s story is “being used to troll the #MeToo movement.”

At The Nation, Joan Walsh wrote about “The heart-wrenching trauma of the Christine Blasey Ford and Brett Kavanaugh hearings.” Her headline about Biden? “The troublesome Tara Reade story,” which she says there are “many reasons to doubt.”

So much for believing all women.

“Marcotte, NY Times, & WaPo have a demonstrable double standard when it comes to truth between Reade and Biden and truth between Blasey Ford and Kavanaugh,” wrote left-wing journalist Katie Halper, who broke the story for The Intercept.

A few left-wingers have had the decency to speak out. One of them is none other than Ocasio-Cortez.

“I find this kind of silencing of all dissent to be a form of gaslighting,” she said.

And AOC said Democrats who refuse to hold Biden to account for alleged sexual harassment have “the exact opposite of integrity.”

The media’s handling of the Biden and Kavanaugh stories “offer an instructive case study in media bias,” wrote Emily Jashinsky at The Federalist. They show “the kind of biased treatment conservatives receive regularly from the corporate media, which largely refuses to address the problem and instead insists its critics are dangerous fools.”

Even the most left-wing member of Congress admits the journalists are “gaslighting” them—and nothing could prove it better than their Biden blindness.