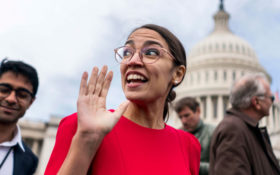 Ocasio-Cortez then said she made a $1,200 payment in the middle of the meeting… on the $1.5 trillion in student loan debt in America.

“I literally made a student loan payment while I was sitting here at this chair, and I looked at my balance, and it was $20,237.16,” Ocasio-Cortez said. “I just made a payment that took me down to $19,000, so I feel really accomplished right now.”

Ocasio-Cortez went to the expensive Boston University and graduated with a B.A. in International Relations and Economics in 2011. According to the school website, it costs $75,002 a year in tuition, housing, and fees in 2019 to attend Boston University.

According to The New York Post, Ocasio-Cortez is just one of nearly 70 members of Congress, approximately 13 percent, that are still paying off student loan debt.

The average debt burden of a Congressperson with student loans is $37,000; Eight lawmakers have more than $100,000 in debt.

Ocasio-Cortez wants taxpayers to help pay her debt off.

“I’m hearing people on this committee say it’s not our job,” Ocasio-Cortez said, referring to Republicans opposition to government interference. “This is our job.”

MUST READ: Sarah Palin gets the last laugh over Ocasio-Cortez