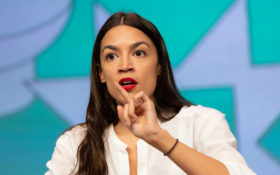 Rep. Alexandria Ocasio-Cortez, D-N.Y., wants to dehumanize conservative voters — and she’s willing to say anything to get her supporters angry.

Not even two years since a deranged alt-left gunman tried to assassinate Republican senators at a Congressional baseball practice, Ocasio-Cortez is throwing fuel on the fire of hatred from the far-left.

She told her supporters on Monday that they must act, or Republicans will create “hell on Earth.”

Ocasio-Cortez went on to call American conservatives liars that hate “brown, black, or poor” babies — because they won’t let them be aborted.

She concluded the statement with her most angry, dangerous claim yet.

Republicans, she said, want to destroy American democracy — and replace our government with a Christian theocracy with President Donald Trump as the king.

To the GOP extremists trying to invoke “the unborn” to jail people for abortion:

Where are you on climate change? OH right, you want to burn fossil fuels til there’s hell on Earth.

If they were truthful about their motives, they’d be consistent in their principles. They’re not.

What angers me about the GOP’s attempts to turn the United States into a far-right Christian theocracy is how dishonest they are about it.

At least be forthright about your desire to subvert and dismantle our democracy into a creepy theological order led by a mad king.

But in a way it’s much more than nonsense to gullible people. After all, 98,000 twitter users “liked” the statement on social media.

This violent rhetoric is part of a dangerous, growing trend among liberal celebrities and politicians. There has been a substantial uptick among liberals demanding violence against conservative voters in America.

Amid this surge in violence against innocent people, Ocasio-Cortez’ conspiracy theory is like throwing fuel on the fire.

Her people will incite and provoke catastrophe along with her. And it’s only a matter of time before one of them acts… again.