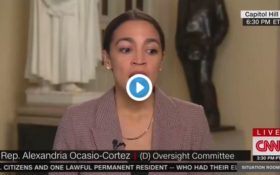 Rep. Alexandria Ocasio-Cortez, D-N.Y., just admitted what supporters of President Donald Trump have known for months — and it’s what Rep. Adam Schiff, D-Calif., has denied from the very beginning.

During an interview on CNN’s “Situation Room” on Wednesday, Ocasio-Cortez let it slip out that Democrats know the impeachment inquiry against Trump is a sham.

The goal isn’t convicting Trump over high crimes and misdemeanors.

The entire Democrat-let impeachment inquiry is about politics and winning the 2020 election, Ocasio-Cortez admitted. Twice.

The first bombshell moment came when CNN host Wolf Blitzer asked Ocasio-Cortez if she was concerned that Democrats could be hurt politically if Republicans aren’t persuaded by the inquiry.

Ocasio-Cortez said she wasn’t concerned one bit, because the whole impeachment inquiry is about winning over voters.

“I’m actually not overly concerned about [not winning over Republicans] because I think the whole point of our public hearings is to present these facts to the public and to let the general public really see the facts for themselves and to understand why we have chosen to move forward with the impeachment inquiry,” she told Blitzer.

In other words: Liberal lawmakers are not “overly concerned” with actual impeachment. Because impeaching Trump isn’t the real goal.

Winning over Republican lawmakers and actually removing the president from office isn’t the goal.

Democrats are only concerned with scoring a public opinion victory.

But that’s not all. Ocasio-Cortez later said the impeachment inquiry was important in unifying the Democratic base ahead of the 2020 election, too.

“At the end of the day, we have to be able to come together as a caucus. And if it’s this Ukranian allegation that is what brings the caucus together, then I think we have to run with however we unify,” Ocasio-Cortez said. “So, while I believe we should be pursuing and investigating quite flagrant abuses of the Emolument Clause … we need to move quite quickly because we’re talking about the potential compromise of the 2020 elections.”

“This is not just about something that has occurred,” Ocasio-Cortez concluded. “This is about preventing a potentially disastrous outcome from occurring next year.”

Ocasio-Cortez says that Democrats' push for impeaching Trump is about uniting the different factions of the Democrat Party, adding: “this is about preventing a potentially disastrous outcome from occurring next year.” pic.twitter.com/nVU93ug2ZF

Straight out of Ocasio-Cortez’s mouth.

The impeachment inquiry is all political theater, meant to win elections.