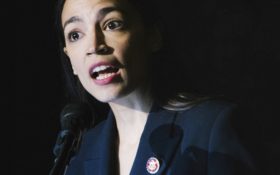 Freshman lawmaker Rep. Alexandria Ocasio-Cortez has made a lot of political enemies in just a short space of time.

And right now… barely half a term into her House career… she’s already in the race of her life!

Her polarizing politics have transformed a once-sleepy “safe” Democratic district into a political hotspot.

She’s facing at least three primary challengers from within her own party.

That’s more than a little ironic, given that she won the seat herself last year by challenging the Democratic incumbent, and has since supported primary challenges to her fellow Democrats who refuse to sign onto her socialist agenda.

One GOP challenger taunted her for using her seat to catapult herself to fame – while leaving her district behind.

“Congresswoman Ocasio-Cortez has done an excellent job establishing a national persona for herself,” former police officer John Cummings told the New York Times. “But most of the people who live in the district, even Democrats I’ve spoken to, feel that she’s just not concerned with what goes on here.”

Another Republican in the race slammed her for infamously chasing Amazon.com out of the city – and some 25,000 jobs along with it.

“It was a slap in the face to hard-working people,” Scherie Murray told Yahoo News. “And to force a narrative of a socialist agenda. What we saw was AOC deliver socialism to America. And we ought to be afraid of that.”

Murray told Fox News that the socialist policies espoused by Ocasio-Cortez and her mentor, Sen. Bernie Sanders (I-Vt.) are “dangerous to America.”

In any other context, the efforts to unseat Ocasio-Cortez in a safe Democratic district might seem like a fool’s errand.

But polls show she is vulnerable – making her a tempting target from both within her party and the GOP, which would consider the district a crowning feather in its cap if it could flip her seat on the way to retaking a House majority next year.

A survey last month found her popularity within her own district has dropped below 50 percent, with 47 percent viewing her favorably.

“It’s clear Rep. Ocasio-Cortez is not sitting well with the voters she was elected to serve,” Justin Greiss of Mobilize the Message, which conducted that survey, told the New York Post.

Nationally, her numbers are at rock-bottom.

“If all voters hear about is AOC, it could put the [House] majority at risk,” an unnamed Democrat working on the party’s 2020 campaign told Axios. “She’s getting all the news and defining everyone else’s races.”

And if that’s not bad enough news, the poll to make this discovery was an internal poll leaked to the media – and it wasn’t a Republican poll or a Republican leak.

It was a poll done by a Democratic organization!

With her own party turning against her, Ocaiso-Cortez could be in for the race of her young career.

If she survives the challenge, few might be willing to shell out big money in another attempt to defeat next time around – meaning she could become an entrenched incumbent, and a thorn in the side of mainstream Democrats and Republicans alike.

But if she loses, it could be a cautionary tale to the left: If you go too far… if you openly and proudly espouse socialism… you’ll get booted from office, even in a liberal haven like New York.