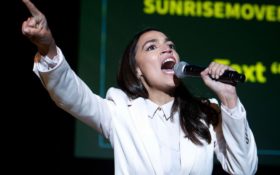 House Majority Speaker Nancy Pelosi, D-Calif., went on the attack this weekend — and it wasn’t Republicans she was targeting.

The Democratic leader trashed the freshman lawmakers when asked about their regular criticism of her.

“All these people have their public whatever and their Twitter world,” Pelosi told The New York Times. “But they didn’t have any following. They’re four people and that’s how many votes they got.”

“If the left doesn’t think I’m left enough, so be it,” she continued. “As I say to these people, come to my basement. I have these signs about single-payer from 30 years ago. I understand what they’re saying.”

“But we have a responsibility to get something done, which is different from advocacy,” she said. “We have to have a solution, not just a Twitter fight.”

That public “whatever” is called public sentiment.

And wielding the power to shift it is how we actually achieve meaningful change in this country. https://t.co/u6JtgwwRsk

FLASHBACK: Ocasio-Cortez had a screaming fit MELTDOWN when she saw…