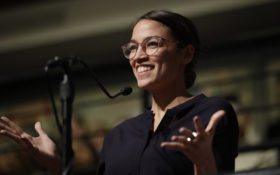 Rep. Alexandria Ocasio-Cortez, D-N.Y., just had her latest stunt blow up right in her face — and her supporters are getting fed up.

Ocasio-Cortez fed her supporters a lot of promises during the 2018 election. Now that it’s time to deliever, she’s struggling to do anything but virtue signal.

It has been a rude awakening from liberals voters.

Just yesterday, Ocasio-Cortez demanded Americans support a strike led by ride share drivers — even though her campaign team has racked up more than $2,000 in charges during the first three months of 2019. Given how relatively inexpensive most Uber and Lyft charges are, $2,000 is a very steep number.

She spent a staggering $16,000 on the service the year before.

Monday, she demanded her voters stop using the service to help the drivers she calls underpaid…

Your Direct Action for today: Don’t take an Uber or Lyft just for the day. (Just today! Cabs are fine! You can do it!)

It’s a small but big way you can help all the drivers you’ve met get paid more to feed their families + support themselves. https://t.co/oaQZsYqukV

It seems Ocasio-Cortez’ sea legs have been a little weak these days.

Ocasio-Cortez demands the American people follow the rules that she ignores. And voters are getting fed up with her hypocrisy — numerous polls show she’s nosedived in popularity since the election.

Even her own party is fed up. Reports from earlier this year have suggest that New York Democrats may attempt to redraw Ocasio-Cortez’ district, because insiders say she’s become too disruptive.

Last year she tried the same stunt, capitalizing on a taxi cab driver’s suicide after the driver was reported to have taken his life in light of financial troubles —

NYC's fourth driver suicide. Yellow cab drivers are in financial ruin due to the unregulated expansion of Uber. What was a living wage job now pays under minimum.

We need:
– to call Uber drivers what they are: EMPLOYEES, not contractors
– Fed jobs guarantee
– Prep for automation https://t.co/FjfapJV2ni

She’s made up this fantasy world in where she’s a worker tasked with springing the Bolshevik Revolution 2.0. But the problem there, is that no, she’s nothing like a laborer at all.

And now that election season is done and she’s gotten into office, hypocrisy such as this is only more proof that she has no interest in doing any real work.

That’s what the people are for.

Sound bites and empty promises are more of her style.