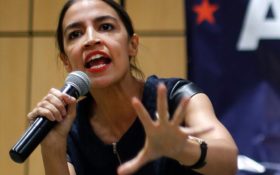 The approval rating of Rep. Alexandria Ocasio-Cortez, D-N.Y., is plummeting across the country — and it has the New York socialist shaking with anger.

“Half of U.S. adults were unfamiliar with or had no opinion of her in September after her seismic primary win over the summer, but that figure has shrunk to 29% today,” the Gallup poll found. “But the increased visibility has not improved her overall standing with Americans.”

But her unfavorable ratings have skyrocketed during that time.

41 percent of Americans say they dislike the freshman Congresswoman now that they’ve become aware of her.

The results seem to have left Ocasio-Cortez furious, and she rushed to blame Fox News for the approval rating downturn.

“The reason people know more is [because] Fox News has turned into the ‘AOC TMZ’ (no offense to TMZ), so awareness is growing [with Republicans,” Ocasio-Cortez wrote.

The reason people know more is bc Fox News has turned into “AOC TMZ” (no offense to TMZ), so awareness is growing w/ GOPers.@JaneMayerNYer has reported deeply on this propaganda machine + it will be aimed at any Dem they want. Nothing changes that.

We can’t be scared by that.

What do you think about Ocasio-Cortez?

How do you rate Alexandria Ocasio-Cortez?