Obama’s VA gave out MILLIONS in bonuses - The Horn News 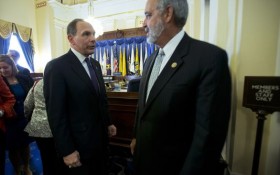 While many of our nation’s veterans died waiting for care — or received substandard treatment — the Department of Veterans Affairs paid out $142 million in bonuses to its employees in 2014.

Including to some of the VA’s worst offenders.

Houlihan, a psychiatrist, was recently fired from his chief of staff position at the scrutinized Veterans Affairs Medical Center in Tomah, WI and his clinical privileges have been revoked.

The VA informed congressional members the decision to fire Houlihan came after the agency investigated his clinical practice as well as his “administrative interactions with subordinates and alleged retaliatory behavior.”

The wait times at VA hospitals, often covered up by administrators, became a national scandal that led to the resignation of VA Secretary Eric Shinseki. And while long wait times reportedly persist, it appears employees’ taxpayer-funded bonus checks arrived right on time.

To check-out a database of employees who were given some of these huge bonuses, click here.