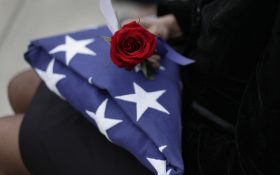 I’ve read a lot of outrageous stories in my day. But this latest from an Illinois Veterans Affairs whistleblower is one of the most shameful things I’ve ever seen.

As a veteran, I care deeply about how our current and former military members and their families are treated by the government. Unfortunately, under President Barack Obama’s leadership, the VA has somehow managed to get worse and worse.

Now, reports out of Illinois say that one veteran’s hospital is so poorly run, they’re leaving the discarded corpses of my fellow brothers-in-arms to rot and decompose over months.

Illinois Sen. Mark Kirk has said that the Hines VA hospital “has been overrun with cockroaches and mold and left vets waiting for care for months on secret wait lists, has reached a new low in the treatment of our veterans. We now have reports of bodies being left to decompose in the morgue for months on end,” according to Fox News.

The problem is so out of control, “Some veteran’s remains have been left in our hospital morgue for 45 days or more until they are stacked to capacity at times,” and at least one had been left so long that the remains liquefied and the body bag burst open when finally moved.

Let that imagery sink in. Now, imagine if it were the remains of someone you know that served.

The mere thought that this could happen is enough to get the blood boiling. The fact that it IS happening is beyond reproach.

The failures of the VA under the Obama administration’s poor leadership has been well noted. It’s gone too far now.

These are the men and women that fought, bled, and sacrificed for our nation. To thank these honored dead, staff left them in discarded piles.

It makes me ashamed to be an American – something I’ve never once said before.

This isn’t the first time we’ve disgraced our veterans with broken promises. But this disrespectful final insult is a step too far.

It’s time for the president to step in. It’s time for Obama to use the executive powers he so readily used in the past for some good.

As a nation, we have a duty to protect our veteran’s dignity, in both life and death. We’ve failed.

That’s unacceptable. And it starts at the top.