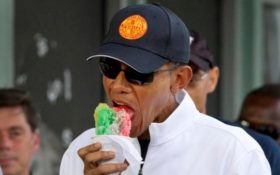 President Barack Obama was routinely critized during his two-terms for the luxurious — and EXPENSIVE — vacations he frequently billed to taxpayers.

With less than fifty days left in office, the final tally of Obama and Vice President Joe Biden’s jet-setting lifestyle is finally coming clear — and the sum they bilked American citizens for is staggering.

According to conservative watchdog group Judicial Watch, after his December vacation to Hawaii was added to the total, the Obama and his cronies spent a staggering $85 million on vacations, golf trips, and beach house rentals throughout his presidency.

“Although the [Hawaii] vacation officially lasted from December 18, 2015, to January 3, 2016, the Secret Service rented several Kailua homes for 19 nights, starting from December 16.  The total for the rentals, located near the Marine Corps base at Kaneohe Bay was $245,993.12.  According to bills obtained by Judicial Watch through the Freedom of Information Act (FOIA), the Secret Service also paid for rooms at the Hawaii Prince Hotel Waikiki and Golf Club.  The Secret Service also reserved rooms at the Moana Surfrider resort on Waikiki Beach, and the Ala Moana Hotel, which cost a total of $40,249.48 and $671,895.99, respectively,” Judicial Watch reported.

And that staggering total is only going to get higher. The total bill forced onto taxpayers for Obama’s summer vacation — a multi-million dollar return to luxurious Martha’s Vineyard — hasn’t been publicly released yet.

In fact, Obama’s dream vacations are so long and frequent that in March of last year, Investors.com calculated that the first family had “traveled more than any other first family, often with Mrs. Obama’s mother and her friends. By the summer of 2014 the Obamas had taken 31 international trips lasting 119 days. At the same point in his presidency, Ronald Reagan had taken 14 such trips over 73 days.”