Obama's net worth EXPLODES after leaving office - The Horn News 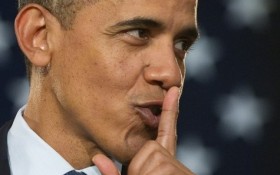 Former President Barack Obama said he went to Washington to look out for the little guy, but new financial records show his family’s net worth has skyrocketed since he took office.

The Obamas are worth a mind-blowing 30-times more than they were when he was elected president in 2008 – and possibly much, much more than that.

Obama was worth $1.3 million when he was elected president in 2008.

He’s now worth an estimated $40 million – and that’s a low-ball figure.

Barack alone made $20.5 million during his two terms as president. Most of that came from royalties on his two autobiographies, according to Forbes magazine.

And since they moved out of the East Wing, the money has just kept rolling in.

“Right now I’m actually surprised by how much money I got,” Obama bragged in a speech in South Africa on Nelson Mandela’s 100th birthday. “And let me tell you something: I don’t have half as much as most of these folks (in the top 1%), or a tenth, or a hundredth.”

Well, he’s definitely got enough – and he’s about to have a whole pile more.

The former first couple just inked a deal to produce a series of “inspirational” stories for Netflix. Neither side has said how much the contract will pay out, but other producers have netted anywhere from $100 million to $300 million.

We know how much his deal is with Penguin Random House: $65 million for each of the Obamas to write a book, coming soon to a remainder bin near you.

Despite his explosive income, Barry still loves to lecture other people about how they need to cut back – even while he and Michelle are living large.

After telling South Africans to move into tiny houses, Obama jetted back to his $8.1 million mansion, which has 8 bedrooms and 9-and-a-half baths.

Maybe the biggest hypocrisy of the speech came when he lectured his fellow super-rich to “help out a little” – by paying more taxes.

He said he wants to hear other rich people say, “I’ll pay a little more in taxes. It’s OK. I can afford it.”

But when this much money ends up in the hands of socialists like the Obamas, it raises a question: Do you really think Barack and Michelle aren’t exploiting every loophole that exists in the tax code?

You don’t see your bank account multiply by 3,000% without a team of lawyers looking for the best way to hide, shelter and cover up as much income as humanly possible from the IRS.

For eight years, Obama had no problem squeezing the middle class with sky-high insurance premiums and regulations that literally killed workers.

But now that he’s made more money than Joe the Plumber could earn in 300 years, do you truly believe he still wants to “spread the wealth around”?

Obama never gets tired of saying the rich need to pay more – that it’s only “fair” if the wealthy get squeezed dry by Uncle Sam.

So here’s a question: How much did he and Michelle pay in extra taxes?

They’re fine with fairness as long as someone else is paying the bill – especially if they’re the ones collecting.

The Obamas are just the latest power couple to cash in on Washington’s favorite parlor game: cutting huge sweetheart deals in exchange for political favors.

She’s not alone – just about everyone in Washington has caught on and cashed in.

House Minority Leader Nancy Pelosi’s bank account grew by a whopping $37,910,468 as of 2014 – more than almost anyone else in Congress.

This kind of sick self-enrichment raises a few questions, like: What favors did they promise to make their millions and who did they have business deals with?

It is only a matter of time until Americans uncover long they will have to pay the price for the policies these corrupt suits hustled for themselves in some smoke-filled back room.