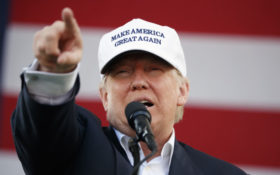 For eight years, President Barack Obama’s foreign policy doctrine has been a failure. The White House’s international actions were deeply rooted in the philosophical belief that the United States isn’t a force for good.

Friday, he took it a step too far.

Following the Obama’s shocking refusal to veto an anti-Semitic U.N. Security Council resolution Friday that called Israeli settlements a violation of international law has flared tensions between the U.S. and the Middle East’s only democracy.

In doing so, Obama opened a political window for President-elect Donald Trump to unite both his party and our country’s closest ally… all while saving American taxpayers billions of dollars.

Israeli Prime Minister Benjamin Netanyahu slammed the resolution, and accused the U.S. of colluding with the Palestinians in drawing it up.

“We have ironclad information that emanates from sources in the Arab world and that shows the Obama administration helped craft this resolution and pushed hard for its eventual passage,” David Keyes, a spokesman for Netanyahu, said. “We’re not just going to be a punching bag and go quietly into the night as the Obama administration helps push such a grave resolution.”

In Trump, Netanyahu has an ally. Trump has proudly brought back the prospect of “America First” — and political analysts see a chance for Trump to use Obama’s miscue Friday to both reassert American power over the United Nations, as well as simultaneously unite previously “Never Trump” Republicans under the president-elects administration.

How? By halting U.S. funding of the United Nations. American taxpayers shoulder the burden of 22% of the U.N.’s annual funding — over three billion dollars annually.

But not for long.

Trump demanded that Obama veto the resolution and tweeted after the vote, “As to the U.N., things will be different after Jan. 20th” — when he takes office.

The United Nations has such great potential but right now it is just a club for people to get together, talk and have a good time. So sad!

Trump’s criticism of the United Nations is shared by moderates in his political party, including anti-Trump GOP lawmakers who have called for Congress to withhold funding for the body following the settlements vote. In fact, even Democratic lawmakers are supporting the president-elect.

“It is extremely frustrating, disappointing and confounding that the [Obama] administration has failed to veto this resolution,” said incoming Senate Minority Leader Chuck Schumer, a Democrat from New York, adding that Obama’s “actions will move us further from peace in the Middle East.”

Spoke w/ Israeli PM @netanyahu tonight to wish him Happy Chanukah & assure him of strong support in Congress. No US $ for UN until reversed.

“I will do everything in my power, working with the new administration and Congress, to leave no doubt about where America stands when it comes to the peace process and where we stand with the only true democracy in the Middle East, Israel,” Graham said.