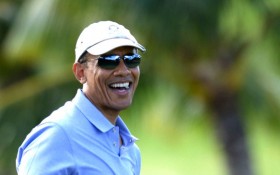 According to new records just obtained by Judicial Watch, the U.S. Department of the Air Force spent over $4 million on President Barack Obama’s February and March 2015 travel to golf outings and Democratic fundraisers. The total, $4,436,245.50, comes exclusively on the taxpayer dime.

At the cost of over $206,000 per hour for Presidential air travel, during these two months President Obama spent nearly $2 million for two golf trips to California and Florida, as well as two luxurious fundraising trips that cost over $2 million to Los Angeles and Chicago.

In California, Obama used taxpayer money for a couple rounds of golf at the prestigious Sunnylands Country Club, and decided to spend the weekend relaxing and soaking up the sunny weather on the exclusive resort, a favorite place of Obama’s where he has stayed numerous times before.

Obama’s trip to Chicago in February was intended to help his Democratic crony, Chicago Mayor Rahm Emanuel, get a “re-election boost”,

“I’m glad he’s my mayor, and I’m glad he’s going to be my mayor for another four years,” Obama told volunteers during his stop off at Emanuel’s campaign headquarters.

Obama’s travel to Los Angeles in March used millions in taxpayer money so he could raise money for the Democratic National Committee. Obama took time to stop by ABC’s late night show “Jimmy Kimmel Live,” and swung by the mansion of buddy and ICM Partners co-founder Chris Silbermann for a chat… where other invited guests were hit up for $33,400 per couple to be allowed to attend. All of the funds raised will be used to aid Democrats during the approaching 2016 election cycle.

Obama then took time to head down to Florida to play golf at the spectacular Floridian National Golf Club, which requires their members to cough up a $50,000 initiation fee and over $15,000 in annual dues.