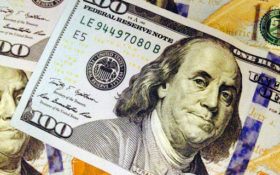 The nation’s health care tab grew at the fastest rate in eight years in 2015, driven by the coverage expansion in President Barack Obama’s law and by costly prescription drugs, the government said Friday.

The growth of 5.8 percent in 2015 boosted total health care spending to $3.2 trillion. That’s an average of $9,990 per person, although the vast share of that money is spent caring for the sickest patients.

Health spending grew about 2 percentage points faster than the overall economy in 2015, said the report from nonpartisan economic experts at the Department of Health and Human Services. That’s a problem because it makes it harder for government programs, employers, and individuals to afford the level of health care that Americans are used to having. 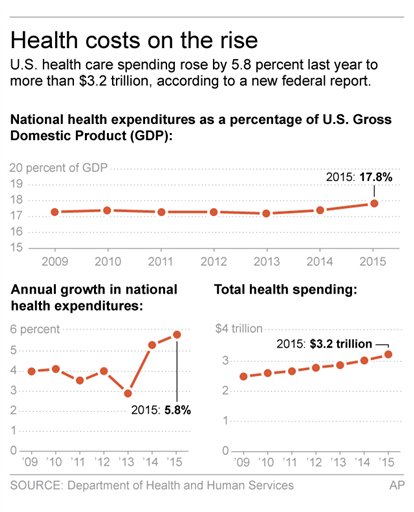 The report was disappointing news for the outgoing Obama administration, which had enjoyed a long stretch of historically low increases in health care spending, and had sought to credit its 2010 health care overhaul for taming costs. It’s a reality check for President-elect Donald Trump, who did not focus much on health care during his campaign and implied that problems could be easily fixed.

America has struggled for decades to balance health care cost, access, and quality. Obama’s law made significant strides to expand access, and the report found nearly 91 percent of U.S. residents now have coverage. But the problem of costs has re-emerged. That’s partly because people with health insurance use more medical care than the uninsured, who tend to postpone going to the doctor. Some of the newly insured turned out to be sicker than those who were already covered.

The report “casts further doubt on the extent of a permanent slowdown in health cost growth,” said economist Eugene Steuerle of the nonpartisan Urban Institute.

In a milestone for data-watchers, the report found that the federal government became the largest payer for health care in 2015. Washington accounted for 29 percent of overall spending. That was followed by households (28 percent), businesses (20 percent), and state and local governments (17 percent). In doing the analysis, the HHS experts count the employee share of premiums for job-based insurance as spending by households.

Spending by private health insurance plans increased by 7.2 percent in 2015, and Medicaid spending grew by 9.7 percent. In both cases, the health care law was a driver. Nine million people had private insurance through the health care law’s subsidized markets, and nearly 10 million had Medicaid coverage as a result of the law. Increases in Medicaid spending will be a problem for states. Starting next year, states that expanded the program under the health law must gradually pick up a share of the costs.

Spending on prescription drugs dispensed through pharmacies increased by 9 percent in 2015. Although that rate of growth was less than in 2014, the report said drug spending grew faster any other category, including hospitals and doctors. It wasn’t only pricey new drugs for hepatitis C infection driving the trend, but also new cancer drugs and price increases for older brand-name and generic drugs.

Medicare was a bright spot in the report, growing only by 4.5 percent, despite roughly 10,000 baby boomers a day reaching eligibility age. Calculated on a per-beneficiary basis, Medicare spending grew by just 1.7 percent.

Still, there seems to be little to cheer about as health care costs start to accelerate. Two of the major brakes on costs in the Obama health care law — a Medicare spending board and a tax on high-priced insurance plans — are in limbo and likely to be repealed if ascendant Republicans follow through on their promises. It’s unclear whether the GOP has better ideas, and even more uncertain whether Democrats would support them.

“You get back to this old problem we have of spending growing faster than the economy,” said Douglas Holtz-Eakin, president of the America Action Forum, a center-right think tank. “If you don’t solve the cost problem, it will undercut coverage expansions because they get too expensive.”

The HHS report was published online by the journal Health Affairs.