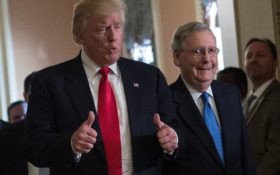 The latest GOP effort to repeal and replace ObamaCare was fatally wounded in the Senate Monday night when two more Republican senators announced their opposition to legislation strongly backed by President Donald Trump.

That’s when he let Congress know who was in charge by taking to Twitter to order the GOP to repeal ObamaCare now and replace it later.

The announcements from Sens. Mike Lee of Utah and Jerry Moran of Kansas left the Republican Party’s long-promised efforts to get rid of President Barack Obama’s health care legislation reeling.

These career politicians can’t agree on anything!

Trump took matters into his own hands on Monday, calling for immediate repeal of ObamaCare:

Republicans should just REPEAL failing ObamaCare now & work on a new Healthcare Plan that will start from a clean slate. Dems will join in!

Lee and Moran both said they could not support Majority Leader Mitch McConnell’s legislation in its current form. They joined GOP Sens. Susan Collins of Maine and Rand Paul of Kentucky, both of whom announced their opposition right after McConnell released the bill last Thursday.

Trump promised that he wouldn’t let the American people down, vowing “We will return!” on Twitter.

We were let down by all of the Democrats and a few Republicans. Most Republicans were loyal, terrific & worked really hard. We will return!

McConnell is now at least two votes short in the closely divided Senate and may have to go back to the drawing board or even begin to negotiate with Democrats, a prospect he’s threatened but resisted so far.

It was the second straight failure for McConnell, who had to cancel a vote on an earlier version of the bill last month when defeat became inevitable.

Despite Trump’s best efforts, the Congress establishment will likely continue to disagree.