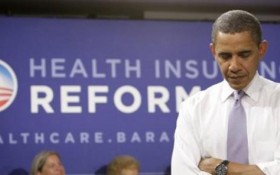 Expect the state-by-state premium requests to reflect what insurers see as the bottom line: The health law has been a financial drain for many companies. They’re setting the stage for 2017 hikes that could reach well into the double digits, in some cases.

For example, in Virginia, a state that reports early, nine insurers returning to the HealthCare.gov marketplace are seeking average premium increases that range from 9.4 percent to 37.1 percent. Those initial estimates filed with the state may change.

More than 12 million people nationwide get coverage though the health law’s markets, which offer subsidized private insurance. But the increases could also affect several million who purchase individual policies outside the government system.

Going into their fourth year, the health law’s markets are still searching for stability. That’s in contrast to more-established government programs like Medicaid and Medicare Advantage, in which private insurers profitably cover tens of millions of people.

The health law’s nagging problems center on lower-than-hoped-for enrollment, sicker-than-expected customers, and a balky internal stabilization system that didn’t deliver as advertised and was already scheduled to be pared back next year.

This year, premiums for a benchmark silver plan rose by a little more than 7 percent on average, according to administration figures. A spike for 2017 would fire up the long-running political debate over the divisive law, which persists despite two Supreme Court decisions upholding Obama’s signature program, and the president’s veto of a Republican repeal bill.

Of the presidential candidates, Hillary Clinton is the only one promising to build on the Affordable Care Act. She’s proposed an aggressive effort to increase enrollment along with measures to reduce consumer costs. The Republican candidates all want to repeal “Obamacare.” Vermont Sen. Bernie Sanders would incorporate it into a bigger government-run system covering everyone.

The health law is “likely in for a significant market correction over the next year or two,” said Larry Levitt of the nonpartisan Kaiser Family Foundation. “There have been a lot of signals from insurers that premiums are headed up.”

Standard & Poor’s health insurance analyst Deep Banerjee said he expects premium hikes to be higher for 2017 than in the larger, more stable market for employer coverage. Insurers are facing higher medical costs from health law customers, and some companies priced their initial coverage too low in an attempt to grab new business.

“What they are doing now is trying to catch up,” said Banerjee.

“We will see the dynamics of the market get tougher as we go forward if we don’t get those kinds of structural changes,” he said. How that would happen in a politically polarized atmosphere, Bertolini did not explain.

Aetna lost more than $100 million on its health law business last year but hopes to break even this year.

The administration says talk of premium increases is premature and overblown. Initial requests from insurers will get knocked back in some states, officials say, aided by a rate-review process strengthened under the health law.

Most significantly, more than 8 out of 10 customers in the health law’s markets get subsidies to help pay their premiums, and that financial assistance will increase as premiums rise. Many have also shown they’re willing to shop around for lower-priced coverage.

“Marketplace consumers would do well to put little stock in initial rate filings,” spokesman Ben Wakana said in a statement. “Averages based on proposed premium changes are not a reliable indicator of what typical consumers will actually pay.”

Also mitigating the pressure for higher premiums is a one-year moratorium — for 2017 — on a health law tax on insurers, part of last year’s federal budget deal.

Still, it’s hard to ignore the litany of insurer complaints.

Last month, an analysis of medical claims from the Blue Cross Blue Shield Association concluded that insurers gained a sicker, more expensive patient population as a result of the law. The “Blues” represent the most common brand of insurance.

Recently, UnitedHealth, the nation’s biggest insurer, said it will radically pull back from the health law markets, citing estimated losses of $650 million this year, on top of $475 million it lost last year.

Many insurers struggled because they didn’t know how much medical care their new customers would use. Some patients had been out of the health care system for years and had been holding off getting needed care. Insurers also say they’ve been hurt by customers who signed up outside the regular enrollment period and then used a lot of services.

Insurers who are more bullish on the program tend to be ones that expanded slowly into the markets and have a lot of experience working with low-income Medicaid recipients.