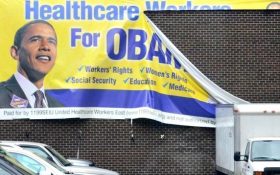 Critics of Obamacare have long predicted that it would fail, and it looks like they were right.

Major flaws in the health care plan have resulted in huge losses for insurers, and now they’re demanding the payments they were promised — and it’s going to cost tax payers billions.

President Barack Obama’s administration has failed to repay considerable losses to private health insurers, and at least three major providers have brought a lawsuit against the federal government.

Their claim dates back to the passing of the Affordable Care Act in 2010, when Obama persuaded insurers’ to support the new health law by easing any worries about unpredictability with the risk-corridor program.

In this program, which expires at the end of 2016, excess profits earned by successful companies would be distributed to the insurers who suffered massive losses.

It sounds like a great plan – in theory – until you take into consideration all of the other complications of Obamacare.

In a study published by the Mercatus Center at George Mason University in 2014, researchers found that the medical claims of individual qualified health plans (QHP’s) consumed 110 percent of the premiums, resulting in major losses for insurers.

And things haven’t improved since the 2014 analysis. According to a McKinsey report, insurer’s losses may have more than doubled in 2015.

Insurers are seeking massive premium hikes for 2017, some as high as 65 percent, suggesting that the losses aren’t projected to lessen anytime soon.

But these people were in poorer health than anticipated, with individual QHP’s averaging 24 percent more medical claims per enrollee than for group QHP’s.

Once the government realized the subsidies would not cover the losses, it looked to the risk corridor program, but the profits on individual Obamacare health plans were not nearly enough to cover the losses suffered by others.

When Obama realized he didn’t have the money to pay back what was promised to the insurers, he attempted to grab the billions of dollars needed right from taxpayers’ pockets.

Congress pushed back, and the lawsuits followed.

On May 17th, Highmark Inc. sued the federal government seeking $223 million in payments.

The nonpartisan Congressional Research Service doesn’t have much faith in the Obama administration following through with the payments, citing legal precedents to prove that the lawsuits will fail. In a report prepared for Senator Marco Rubio, the CRS concluded “any payment to satisfy a judgement secured by plaintiffs seeking recovery of amounts owed under risk-corridors programs would need to wait until such funds were made available by Congress.”

And it’s going to come right out of tax payers pockets.

— Aimee Pontier is an Editor of The Horn News