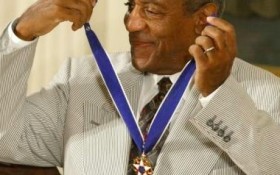 The highest civilian honor America can give now belongs to an accused rapist. And if we’re to take President Barack Obama at his word, he doesn’t plan to do a thing about it.

Comedian Bill Cosby was arrested yesterday in Pennsylvania, accused of sexually assaulting a Temple University employee more than a decade ago. Dozens of women have now claimed that Cosby drugged and raped them during a career that has spanned more than half a century.

While numerous colleges and universities have come forward to strip Cosby of honorary degrees he has earned over the years, Cosby may get to keep his most significant honor — the Presidential Medal of Freedom.

The Presidential Medal of Freedom’s roots trace back to 1945, and it’s the most significant honor an American president can bestow on a civilian.

Cosby was given the Presidential Medal of Freedom in 2002 by former President George W. Bush. But as rape allegations continued to mount against Cosby this summer, Obama said he had no plans to take back the award.

At the time, Obama said there was “no precedent” for revoking the medal.

“We don’t have that mechanism,” Obama said.

But that statement has rung hollow among critics who point out that Obama has a long history of taking unprecedented, unilateral action.

Sens. Kirsten Gillibrand (D-N.Y.) and Claire McCaskill (D-Mo.) have been leading the charge to encourage Obama to rescind the award.

Time has a running list of Cosby honors that have not been revoked. To see it, click here.