Obama using taxpayer cash on... WHAT!? - The Horn News 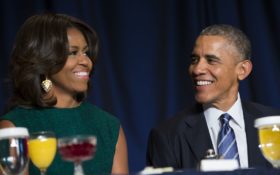 It has been nearly two years since President Donald Trump and his family moved into the White House – but now former President Barack Obama has has big plans to ride back into power.

The shady dealings at Obama’s tax-exempt foundation shows he is ramping up for another assault on the country — at taxpayers’ expense.

The Obama Foundation filed its 990 form with the IRS on Tuesday. What this stunning document revealed is questioning – but what it covers up is absolutely explosive.

The Obamas refuse to tell the IRS who’s funding them – even though the donations run into the tens of millions of dollars!

In past years, the foundation’s 990 forms listed the amount of each donation and who made it… but not anymore.

The Chicago Sun-Times noticed the Obamas’ attempt to whitewash their donor list earlier this week. The paper reported that the 990 form only reports the number and amount of its mega-millions donations:

But who made those mysterious donations?

The Obamas’ lips are sealed – and so are their records.

“The system is designed to obfuscate,” the Sun-Times reported.

The foundation’s website lists what it claims are all its donors’ names — but the Obamas had been known to regularly scrub people’s names off the White House visitor logs, so we’ll take their word with a grain of salt.

Their records say that 56 donors gave $1 million or more – but they won’t tell us how much more. We know at least 13 people gave $5 million or more, but we have no idea who they are.

The Obamas tell us that donors include some of the heavy-hitters in left-wing grantmaking: The Bill & Melinda Gates Foundation, the Ford Foundation, the Oprah Winfrey Charitable Foundation, and the George Lucas Family Foundation.

The foundation got a donation from the Goldman Sachs Philanthropy Fund – and Obama sure did enough for them while he was in office.

But he also got a $1 million-plus donation from the Joyce Foundation. Obama served on the board of the radical left-wing foundation for 8 years (1994-2002).

During that time, the foundation handed out hundreds of thousands of dollars to domestic terrorist Bill Ayers, who was trying to indoctrinate schoolchildren in anti-American radicalism.

The Joyce Foundation regularly finances far-left groups and radicals – so what does it expect from Obama?

The Obama Foundation’s IRS filing may give us just a hint at the answer.

The foundation’s mission has transformed since it was formed in 2014. It started out aiming to build its huge eye-sore of a shrine to Obama in Chicago, but it’s moved on to taking political action.

The new files say the Obama Foundation has evolved, and it will start forming new programs to “honor the legacy” of Obama. It will “inspire” and “empower” voters.

The same week that the Obama Foundation filed its new secretive, activist IRS form – lo and behold – former first lady Michelle Obama has been crossing the country with her get-out-the-vote campaign.

She’s using the group When We All Vote, which she co-chairs, to register voters all over the country.

That Obama-linked group just finished its $8 million “Week of Action” to flood the voter rolls with newly registered Democrats. All of the people in the effort were Trump-hating liberals.

The Obama Foundation is morphing into a get-out-the-vote machine – and all with a tax-exempt status.

And the Obamas are just getting started.

Last year, 7 people made at least 6-figure salaries – including Michael Strautmanis, its vice president of civic engagement, who has strong ties to MoveOn.org.

With that many people making that much money, Barack and Michelle obviously have big plans.

The Obama Foundation has also branched out, with offices in Chicago, New York City, and Washington, D.C.

We know what kind of left-wing socialist activism the Joyce Foundation funds. But just who else is paying the Obama’s bills? And what do they think they’re getting for their money?