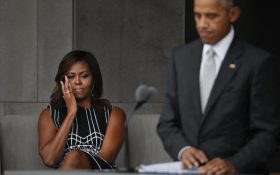 Former President Barack Obama and his wife, Michelle, are returning to the spotlight just in time to campaign for the November midterm election — and they have plans to take control once again.

On Friday, Obama will be accepting an award where he has plans to give a speech that stumps for several House Democratic candidates from California at an event in Orange County.

Meanwhile, Michelle Obama also has plans to step back into politics by headlining voter registration rallies in Las Vegas and Miami later this month during a week of action by a new organization, When We All Vote, which of course… she co-chairs.

In July, The Horn News reported, “Since leaving the White House, the so-called champion of the poor has raked in millions of dollars in appearance and speaking fees, and book deals.”

Friday will be no different for the former president. An adviser said Obama would be “pointed” in taking on the current political environment and what has led to this moment in American politics.

Obama will then campaign Saturday for several House Democratic candidates from California at an event in Orange County. He recently endorsed 81 Democrats up and down the ballot in 13 states, with a second wave expected in the fall.

The campaign activity will continue through October and include fundraising appearances.

According to critics, Obama has taken a “low-key” role in politics lately because he’s very aware that he does not have a strong track record in helping Democrats win in years when he’s not on the ballot, and that his presence can have the effect of energizing Republicans.

For her part, Michelle will hold voter registration rallies in Las Vegas on Sept. 23 and Miami on Sept. 28, said Stephanie Young, communications director for When We All Vote.

To no surprise, Michelle’s so-called ‘non-partisan’ organization has recruited several liberal stars to be the voice of the organization including actor Tom Hanks, “Hamilton” creator Lin-Manuel Miranda, the NBA’s Chris Paul, and singers Faith Hill and Tim McGraw.

All those celebrities are frequently outspoken critics of President Donald Trump and his supporters.

The Obamas clearly have one goal in mind: to flood voter roles just in time for the midterm elections.

It’s time for Republicans to take a stand and get out and vote, the Obamas had their chance — and now it is President Donald Trump’s turn to take back our country.