Obama and Trump have 'excellent' first meeting - The Horn News 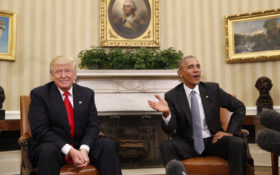 In a cordial beginning to their transfer of power, President Barack Obama and President-elect Donald Trump met at the White House Thursday. Obama called the 90-minute meeting “excellent,” and his successor said he looked forward to receiving the outgoing president’s “counsel.”

At the close of the Oval Office sit-down, Obama said to Trump, “We now are going to want to do everything we can to help you succeed because if you succeed the country succeeds.”

The two men, who have been harshly critical of each other for years, were meeting for the first time, Trump said. The Republican called Obama a “very good man” and said he looked forward “to dealing with the president in the future, including counsel.”

Obama blasted Trump throughout the campaign as unfit to serve as a commander in chief. Trump spent years challenging the legitimacy of Obama’s presidency, falsely suggesting Obama may have been born outside the United States.

But at least publicly, the two men appeared to put aside their animosity. As the meeting concluded and journalists scrambled out of the Oval Office, Obama smiled at his successor and explained the unfolding scene.

If Trump makes good on his campaign promises, he’ll wipe away much of what Obama has done during his eight years in office. The Republican president-elect, who will govern with Congress fully under GOP control, has vowed to repeal Obama’s signature health care law and dismantle the landmark nuclear accord with Iran.

“The two men did not relitigate their differences in the Oval Office,” Earnest said. “We’re on to the next phase.”

Trump traveled to Washington from New York on his private jet, breaking with protocol by not bringing journalists in his motorcade or on his plane to document his historic visit to the White House.

From the White House, Trump headed to Capitol Hill for meetings with House Speaker Paul Ryan of Wisconsin and Senate Majority Leader Mitch McConnell of Kentucky to discuss the GOP legislative agenda. Ryan said he and Trump had a “fantastic, productive meeting” at the Capitol.

Trump called the meeting “an honor.” He added that, “I think we’re going to do some absolutely spectacular things for the American people.”

Trump may have signaled early agenda items where the Republicans agree. He said: “We can’t get started fast enough, whether it’s health care or immigration.”

Ryan then took Trump, Melania Trump and Vice President-elect Mike Pence out onto his balcony overlooking the Mall. Ryan pointed to where the inaugural platform being is built. That’s where Trump will be sworn in.

Trump at one point gestured toward the tower of his new hotel, between the White House and the Capitol.