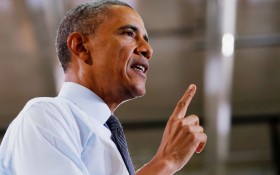 If President Barack Obama has his way, the biggest terrorist recruiting centers will no longer be in the Middle East.

Should Obama follow through with his announced plan to use an executive order to shut down the Guantanamo Bay prison, the biggest radical Islamist recruiting centers would be right here in the United States.

This executive order by Obama – expected soon – would move 61 high-risk inmates who want nothing more than to kill Americans into federal prisons around the nation.

We’re supposed to believe they will be in the toughest conditions, regretting every moment of their criminal lives.

But in reality, these radical terrorists will instantly become the biggest, baddest prison celebrities among certain prison populations. They will command instant respect, have instant credibility and exercise instant authority over the increasingly large numbers of Muslim inmates.

Former FBI Director Robert Mueller admitted in 2009 that moving Gitmo inmates into U.S. prisons would “support terrorism” by allowing them to radicalize others.

They won’t have to look very far for followers. There is already a strong Islamic presence in many American prisons. Roughly 350,000 U.S. inmates are Muslim, with another 35,000-40,000 converting every year while in prison.

And when they’re converting, they’re not finding the so-called religion of peace.

According to experts, most inmates who convert to Islam in prison join the Wahhabi sect, the harsh Saudi form of Islam that gave birth to ISIS and teaches raw hatred of everyone else.

Putting Gitmo detainees into this environment would be giving those inmates heroes to worship and follow… and, once released, to emulate. The Gitmo terrorists may never leave federal prison, but eventually some of their newly anointed followers will.

Which is exactly how one creates a homegrown terrorist cell.

This isn’t a paranoid vision of the future. Even without Gitmo detainees mixing into the prison population, it has already happened.

Remember Jose Padilla, who was convicted of plotting to create and detonate a dirty bomb?

He was radicalized in prison.

Supporters of the Obama administration relocation plan have claimed the prison conditions won’t allow the creation of more radicals, and that Gitmo detainees will be sent to tough federal supermax prisons, where inmates can go years without human contact.

But that’s not the reality. Like any other prison, the inmates have plenty of contact – so much contact that an inmate at “America’s toughest prison,” the supermax facility in Florence, Colorado, was recently able to carry out a hit on another inmate.

And inmates are allowed group prayer, a perfect opportunity for indoctrination.

And if you think the “imam” in charge will keep an eye on things, think again. Some are already intent on helping to spread radical Islam.

For example, Warith Deen Umar – the imam who helped run the Islamic prison program in New York – is on record calling the 9/11 hijackers “martyrs” and saying American Muslims who claim to be against terror secretly applauded the attacks.

Placing a Gitmo detainee into this environment is like adding a match to a powder keg, where they have little chance of reform.

Of these hardened, worst-of-the-worst terrorists in Gitmo, nearly a third of the 650 released by the Obama administration so far returned to a life of violence and jihad.

One of them, Mohammed al Alami, became a liberal cause after claiming he only confessed to being an al Qaeda terrorist under torture.

Eventually, he was released and swore he would never return to a life of violence.

Later, he was found dead in Syria, where he had been fighting with an al Qaeda-linked extremist group.

A terrorist leader was seen on video praising al Alami for enduring “the prison of the Americans in Guantanamo for five years … where he did not reform or change.”

Another prisoner already released, Mahmoud Omar Bin Atef, has said he intends to “research guard force personnel’s names and faces on the Internet and sneak into their homes to cut their throats like sheep.”

There’s really only one place to keep people like this: Guantanamo Bay. Far away from mainland American soil.

Because inviting these religious extremists into the American prison system is inviting terror cells into our streets.