Obama stunned critics on Tuesday when he said... (he MUST be joking!) - The Horn News 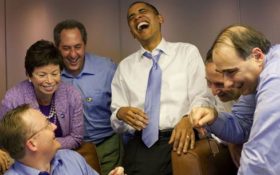 Critics say former President Barack Obama lives by the hypocritical life motto, “Rules are for thee, not for me.”

Since leaving the White House, the so-called champion of the poor has raked in millions of dollars in appearance and speaking fees, and book deals. He regularly vacations in paradise with famous celebrities. He golfs with billionaires at exclusive resorts. He charters private jets so he can dine at the world’s finest restaurants.

At the same time, he says others should be grateful the government doesn’t take more from their paychecks.

At a recent speech in South Africa, Obama doubled-down on his hypocritical rhetoric. After holding back laughter about corruption laws, he told the crowd of 10,000 poor South Africans, “There’s only so big a house you can have.”

Obama, it should be noted, recently bought an $8.1 million, 8,200 square foot mega-mansion in the suburbs of Washington, D.C. It boasts crystal chandeliers, marble tile flooring, and a new privacy fence to keep out undesirable neighbors.

“Obama and his wife, Michelle, signed a book deal worth $60 million in early 2017,” The Washington Examiner reported. “They also inked a deal with Netflix in recent months to produce series and movies for the streaming service, but it is unknown how much the Obamas’ Netflix deal is worth.”

Obama: “Right now I'm actually surprised by how much money I got. And let me tell you something, I don't have half as much as most of these folks… There's only so much you can eat. There's only so big a house you can have. There's only so many nice trips you can take." pic.twitter.com/LALI5TCA0i