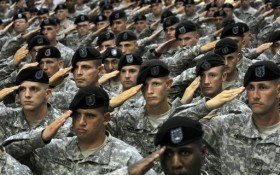 Under President Barack Obama’s leadership, the size of the U.S. Army has shrunk by thousands — and new report has confirmed that it became the smallest it has been in 76 years in March.

“The Army’s latest headcount shows that nearly 2,600 soldiers departed active service in March without being replaced, an action that plunges manning to its lowest level since before World War II. During the past year the size of the active force has been reduced by 16,548 soldiers, the rough equivalent of three brigades,” The Army Times reported Saturday.

This manpower shortage has Army leadership worried about the state of readiness of our defense. And that’s just the beginning.

“Without congressional or Defense Department intervention, the drawdown will continue for two more years, with endstrength hitting 460,000 soldiers in 2017, and 450,000 in 2018,” according to The Army Times report.

The plan for this steady force reduction was first announced in July 2015. And if those numbers are hit, it would mean a 20 percent reduction in the Army’s manpower from it’s peak of over 570,000 in 2010.

In April, “Army Chief of Staff Gen. Mark Milley sounded the alarm that the US Army is currently in a state of ‘high risk’ when it comes to being ready enough to defend the nation and respond to a large conflict,” the Military Times reported.

Gen. Daniel Allyn, vice chief of staff of the Army, echoed opinion to Fox News, saying “These are not cuts the Army wants to make, these are cuts required by budget environment in which we operate,” and that, “This 40,000 soldier cut… will only get us to the program force, it does not deal with the continued threat of sequestration.”