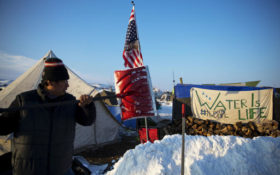 President Barack Obama has backed down once again. In a cowardly and economically backwards move, Obama has refused to complete a billion dollar pipeline project in North Dakota in a purely political manner.

After weeks of protests, Obama is clearly more concerned about his legacy than what is right, and has officially abandoned the nearly complete project.

The U.S. Army Corps of Engineers said Sunday that it won’t grant an easement for the Dakota Access oil pipeline in southern North Dakota, handing a victory to the Standing Rock Sioux tribe and its supporters, who argued the project would threaten the tribe’s water source and cultural sites.

And there are multiple vocal critics.

North Dakota’s leaders criticized the decision, with Gov. Jack Dalrymple calling it a “serious mistake” that “prolongs the dangerous situation” of having several hundred protesters who are camped out on federal land during cold, wintry weather. U.S. Rep. Kevin Cramer said it’s a “very chilling signal” for the future of infrastructure in the United States.

The company constructing the pipeline, Dallas-based Energy Transfer Partners, released a statement Sunday night slamming the decision as politically motivated and alleging that President Obama’s administration was determined to delay the matter until he leaves office.

“The White House’s directive today to the Corps for further delay is just the latest in a series of overt and transparent political actions by an administration which has abandoned the rule of law in favor of currying favor with a narrow and extreme political constituency,” the company said.

The four-state, $3.8 billion project is largely complete except for the now-blocked segment underneath Lake Oahe, a Missouri River reservoir. Assistant Secretary for Civil Works Jo-Ellen Darcy said in a news release that her decision was based on the need to “explore alternate routes” for the pipeline’s crossing. Her full decision doesn’t rule out that it could cross under the reservoir or north of Bismarck.

“Although we have had continuing discussion and exchanges of new information with the Standing Rock Sioux and Dakota Access, it’s clear that there’s more work to do,” Darcy said. “The best way to complete that work responsibly and expeditiously is to explore alternate routes for the pipeline crossing.”

President-elect Donald Trump, a pipeline supporter, will take office in January, although it wasn’t immediately clear what steps his administration would be able to take to reverse the Army Corps’ latest decision or how quickly that could happen.

The decision came a day before the government’s deadline for the several hundred people at the Oceti Sakowin, or Seven Council Fires, encampment to leave the federal land. But demonstrators say they’re prepared to stay, and authorities say they won’t forcibly remove them.

As the news spread Sunday, cheers and cheers and chants of “mni wichoni” “water is life” in Lakota Sioux broke out among the protesters. Some in the crowd banged drums. Miles Allard, a member of the Standing Rock Sioux, said he was pleased but remained cautious, saying, “We don’t know what Trump is going to do.”

“The whole world is watching,” Allard added. “I’m telling all our people to stand up and not to leave until this is over.”

Attorney General Loretta Lynch said Sunday that the Department of Justice will “continue to monitor the situation” and stands “ready to provide resources to help all those who can play a constructive role in easing tensions.”

“The safety of everyone in the area – law enforcement officers, residents and protesters alike – continues to be our foremost concern,” she added.

Morton County Sheriff Kyle Kirchmeier, whose department has done much of the policing for the protests, said that “local law enforcement does not have an opinion” on the easement and that his department will continue to “enforce the law.”