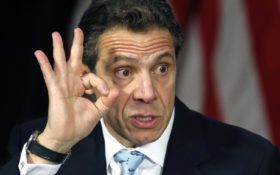 New York Governor Andrew Cuomo, a loyal political ally of former President Barack Obama, has pledged to take legal action if the Supreme Court rolls back Roe v. Wade, the ruling that made abortion legal in 1973.

The only problem: You can’t sue the Supreme Court, because they’re the highest court.

Cuomo announced his plan while speaking to a crowd in New York on Wednesday. He said that Republicans in control of the Senate have no excuse for not understanding that Roe v. Wade should be protected at the state level.

The novel idea by the reputed attorney quickly went viral on social media — and Twitter users had a field day trolling his promise.

New York Capitol reporter shared Kavanaugh’s script on Twitter saying, “One of Cuomo’s new favorite tricks is to say “We will sue IF…””

In this case, the "if" is: 1) Kavanaugh is confirmed; 2) New York passes a law tightening its abortion laws; 3) the Supreme Court agrees to take up Roe v. Wade; 4) the court overturns Roe v. Wade pic.twitter.com/zvEsvktKDO

“We now need to codify Roe v. Wade, which will actually increase the protections in New York,” Cuomo told the crowd.

Does anyone else want to point out the flaw in this plan?

One Twitter user pointed out a major flaw in Cuomo’s plan — what court do you take the highest court to?

What court do you take the Supreme Court to?

Good luck trying to figure that one out, Cuomo.