Obama pal to save serial killer’s life - The Horn News 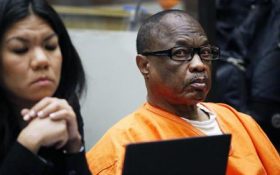 President Barack Obama has been repeatedly criticized for his soft stance on crime. And his tolerance for lawlessness has found a prophet in liberal California Gov. Jerry Brown.

Lonnie Franklin Jr., a California series killer dubbed the “Grim Sleeper,” was sentenced to death row Wednesday for the murders of nine women and one teenage girl.

But Obama crony Brown will practically guarantee that this savage serial killer never has to actually face the music.

Franklin, 63, was convicted in a string of killings from 1985 to 2007 in a Los Angeles neighborhood ravaged by the crack cocaine epidemic.

His gunshot and strangling victims were found dumped in seedy alleys, wrapped in carpets or hidden under discarded mattresses.

His final victim, Janecia Peters, was found by someone rooting through a dumpster who noticed her red fingernail.

Franklin was linked to 14 slayings, including four women he wasn’t charged with killing.

Some residents complained police didn’t thoroughly investigate the slayings because the victims were young, black and poor and many were drug users and prostitutes.

Now their 30-year quest for justice will face its worst enemy — California liberals like Brown.

If Franklin was facing justice in a conservative state like Texas, one could imagine they’d be preparing the noose today. But since California reinstated capital punishment in 1978, the state has executed only 13 of the 850 criminals juries have sentenced to death.

During his tenure as governor, Brown has failed to execute a single death row inmate. Not one. In fact, California hasn’t executed a condemned prisoner since January 2006, when Republican Arnold Schwarzenegger was governor.

Following the last execution, “problems with lethal injection protocols brought the state’s execution machinery to a halt. It has never restarted. In the meantime, California’s death row, by far the largest in the country, has continued to grow, from 646 people in January 2006 to some 750 today. Last year, California officially ran out of space for its condemned prisoners, prompting [Brown] to request $3.2 million from lawmakers to expand its death row cells,” The Intercept reported in January.

As the “Grim Sleeper” was led out of the courtroom Wednesday, family members of the victims began clapping.

Don’t cheer too loudly yet. Lady Justice still has to get past the Democrats.