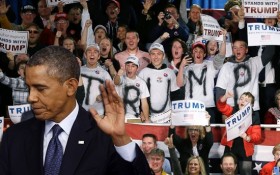 President Barack Obama took time during the Asian Leaders press conference in California on Wednesday to weigh in on the 2016 presidential election.

And as always, it was to take a cheap shot.

Specifically, Obama made the rather bold claim that Republican frontrunner Donald Trump will never be the leader of the United States, because he’s not a serious candidate.

If a win in New Hampshire and a commanding lead in national polls isn’t enough to get Obama to take a candidate seriously, it’s hard to know what is.

“I continue to believe that Mr. Trump will not be President. And the reason is because I have a lot of faith in the American people and I think they recognize that being president is a serious job,” Obama said.

He continued, “It’s not hosting a talk show or a reality show. It’s not promotion. It’s not marketing. It’s hard, and a lot of people count on us getting it right.”

Confronted with the quote at a recent rally in South Carolina, Trump had what his supporters may consider a perfect response.

“You’re lucky I didn’t run last time, when Romney ran, because you’d have been a one-term president.”

Watch the video of his response here: