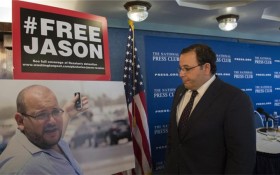 The Obama Administration spent months at the negotiating table with the Iranian government, trading billions in sanctions relief for nuclear restrictions.

But questions remain about how the administration failed to accomplish one simple task during its dealings with the Iranians — securing the release of an imprisoned American hostage.

Now, after more than a year in Iranian prison on “outrageous” charges of espionage, Washington Post reporter Jason Rezaian has been convicted in a closed door, secret court, according to a spokesman for the Iranian judiciary.

“He has been convicted, but I don’t have the details,” he said.

Ejehi discussed Rezaian’s case during a press conference earlier Sunday that was restricted to Iranian media. Initial Iranian media reports, which quoted Ejehi as saying that a verdict has been issued, didn’t include any comment that Rezaian had been convicted — leading to confusion surrounding the decision.

Only the semiofficial ISNA news agency eventually reported the conviction comment, and later in the day state TV broadcast Ejehi’s comment that Rezaian has been convicted. State TV aired selected video of the press conference and called Rezaian an “American spy.”

“Iran has behaved unconscionably throughout this case, but never more so than with this indefensible decision by a Revolutionary Court to convict an innocent journalist of serious crimes after a proceeding that unfolded in secret, with no evidence whatsoever of any wrongdoing. For now, no sentence has been announced,” he said in a statement Monday.

The paper is working with Rezaian’s family and legal counsel to swiftly appeal the verdict and push for his release on bail pending a final decision, Baron said.

“The contemptible end to this ‘judicial process’ leaves Iran’s senior leaders with an obligation to right this grievous wrong. Jason is a victim — arrested without cause, held for months in isolation, without access to a lawyer, subjected to physical mistreatment and psychological abuse, and now convicted without basis. He has spent nearly 15 months locked up in Iran’s notorious Evin Prison, more than three times as long than any other Western journalists.”

Baron reiterated the Post’s position that Rezaian is innocent and that he should be exonerated and set free.

Leila Ahsan, Rezaian’s lawyer told The Associated Press on Sunday “there are no new developments” and said she had not yet received the verdict. Ahsan was not reachable for comment on Monday.

Rezaian was detained with his wife, who is a journalist for The National newspaper in the United Arab Emirates, and two photojournalists on July 22, 2014. All were later released except Rezaian.

Rezaian, the Post’s Tehran bureau chief since 2012, has dual Iranian-American nationality. Iran does not recognize dual nationality for its citizens.

Rezaian faced multiple charges including espionage in a closed-door trial that has been widely criticized by the U.S. government and press freedom organizations. He reportedly faces up to 20 years in prison if convicted.