Obama got some bad news on the whistleblower - The Horn News 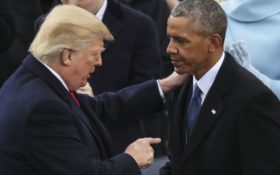 The impeachment trial of President Donald Trump is underway in the Senate — and it’s not going the way Democrats had hoped.

Behind the scenes, a new report just dropped a bombshell on the whistleblower accusations against Trump and his administration.

And it all links straight back to former President Barack Obama‘s administration.

It’s very bad news for political allies of Obama — but good news for Trump supporters that have complained about the so-called “witch hunt” against the president.

According to RealClearInvestigations, a White House official has come forward with a shocking allegation. The alleged CIA whistleblower at the heart of the Ukraine phonecall complaint had been conspiring with Democratic officials — including a staffer inside the office of Rep. Adam Schiff, D-Calif. — since Jan. 2017, two-and-a-half years before the formal complaint against Trump.

Experts say this new report undermines every argument that Obama’s political allies have been making in their efforts to remove Trump from office.

“Barely two weeks after Donald Trump took office, Eric Ciaramella – the CIA analyst whose name was recently linked in a tweet by the president and mentioned by lawmakers as the anonymous ‘whistleblower’ who touched off Trump’s impeachment – was overheard in the White House discussing with another staffer how to remove the newly elected president from office, according to former colleagues,” RealClearInvestigation’s Paul Sperry reported Wednesday.

The staffer conspiring with Ciaramella was reportedly Sean Misko, who left the White House over the summer to join Schiff’s office and is a key member of his impeachment team.

“Just days after he was sworn in they were already talking about trying to get rid of him,” the official reportedly told Sperry. “They weren’t just bent on subverting his agenda. They were plotting to actually have him removed from office.”

In other words, this wasn’t a spontaneous development over a questionable Ukrainian phone call and a “somber” sense of duty, like Democrats have been claiming.

This report proves the political coordination between the Ukraine whistleblower and Schiff’s office started when Trump was inaugurated.

“They didn’t like his policies,” another former White House official told Perry. “They had a political vendetta against [Trump] from Day One.”

“After [former Gen. Michael] Flynn briefed [White House staff] about what ‘America First’ foreign policy meant, Ciaramella turned to Misko and commented, ‘We need to take him out,’ ” the source told Perry. “And Misko replied, ‘Yeah, we need to do everything we can to take out the president.’”

“By ‘taking him out,’ they meant removing him from office by any means necessary,” a military staffer claimed. “They were triggered by Trump’s and Flynn’s vision for the world. This was the first ‘all hands’ [staff meeting] where they got to see Trump’s national security team, and they were huffing and puffing throughout the briefing any time Flynn said something they didn’t like about ‘America First.’ ”

Do you believe the Obama holdovers that the impeachment of Trump is a somber duty?

Or is the impeachment trial just a political witch hunt that needs to be shut down?

Is the impeachment trial of Trump a political "witch hunt"?

Vote in this urgent poll and let America hear your voice --