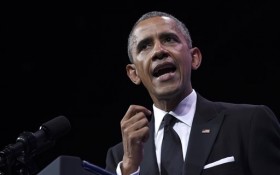 President Barack Obama didn’t pull any punches during an interview with CBS’ ’60 Minutes’ yesterday. Obama said he knows that Hillary Clinton’s inappropriate and unsafe use of a private email server was a ‘mistake’, and he’s calling for her to face the music.

But what Obama failed to mention in the interview is how all of this happened under his watch.

Clinton’s email scandal began while she was serving as secretary of state for the Obama Administration. And there has long been speculation that Obama was well aware of Clinton’s email setup long before the story broke in the media.

Still, Obama said Sunday that public officials have to be more sensitive about how they handle information and personal data.

“I think she’d be the first to acknowledge that maybe she could have handled the original decision better and the disclosures more quickly,” Obama said.

There are still questions being raised about the security of Clinton’s email system.

Senate investigators recently discovered that the private server was subjected to unspecified hacking attempts in 2013 from China, South Korea and Germany. The FBI is still examining her system, and that review could reveal evidence, if any, of unauthorized intrusions into her server or any attempts to siphon off her data.

Clinton has yet to answer specific questions about the security protections in her unusual email setup, which ran out of her New York home and not in a professional data center during her time as secretary of state.