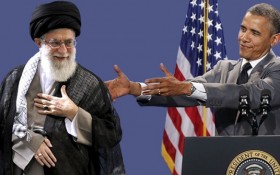 Iran is set to reap a windfall of $100 billion as sanctions are lifted thanks to a nuclear deal brokered by President Barack Obama’s administration.

But a key Iran watchdog is warning that while the hardline regime will be flush with cash, there’s nothing stopping the country from using the money to continue its nuclear ambitions.

And Iran may be just months from being able to build its own nuclear bomb.

Secretary of State John Kerry sought today to downplay the amount of money and frozen assets that will now flow to Iran, after the International Atomic Energy Agency declared that Iran had met its obligations under the terms of the accord. But it’s clear that $30 billion will be immediately available, according to multiple sources, and tens of billions more dollars will soon follow.

Previous estimates had valued the frozen assets at $100 billion or more.

Many fear this significant influx of cash (the Iranian gross domestic product is less than $400 billion a year) could embolden hardliners in their pursuit of a nuclear bomb, and give them the financial ability to speed up the process.

The nonprofit watchdog organization Iran Watch estimates that the Islamic Republic could easily produce a nuclear weapon within the year – and perhaps as quickly as just two months from now.

And, as the group notes, the nuclear deal does not stop Iran from enriching uranium. Critics have also expressed concerns about provisions of the accord that do not allow for unannounced inspections.

The new sanctions will not affect the unfreezing of Iranian assets.

In Israel, Prime Minister Benjamin Netanyahu continued to be an outspoken critic of the deal. He says it will not curb Iran’s ultimate nuclear aspirations and does not impede Iran’s longstanding support for Israel’s worst enemies, like the Lebanese Hezbollah group and the Palestinian Hamas.

He said Israel remains committed to preventing Iran from making a nuclear weapon and that “what is clear is that Iran will now have more resources to divert to terrorism and its aggression in the region and around the world.”