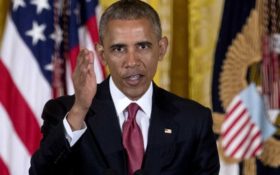 Activists filed a lawsuit Monday in federal court to halt the construction of the planned Obama Presidential Center in Chicago. The group, Protect our Parks, Inc., accused Obama’s team of using an “institutional bait and switch” by advertising the center as a home of Obama’s presidential library as a means to get access to land in the city’s historic public parks.

The lawsuit could halt the construction of the center for years.

The center’s team is accused of running a short-term “con game” — a “corrupt scheme” in the “classic Chicago political way” — as a way to illegally grab land away from local residents to benefit Obama.

The timing couldn’t be worse for Obama.

“The lawsuit comes days before the Chicago Plan Commission meets to consider the project submitted by the Obama Foundation, the Chicago Park District and the Chicago Department of Transportation. Boundaries approved by the City Council in 2015 have changed and need to be approved by the commission. Community organizers, academics and environmentalists have for years opposed the plan to build the center on Chicago’s historic public parklands,” The Washington Times reported.

As part of the plan, local taxpayers would pay a jaw dropping $175 million and forever surrender control of their historic public land to benefit the former president’s legacy.

Yup… that sounds like the classic Obama move, all right.