Obama got a CHILLING warning on Wednesday - The Horn News 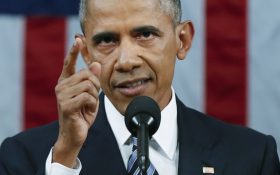 President Donald Trump sent a message to Democratic House leaders and former President Barack Obama on Wednesday — and it made everyone in the room sit-up and listen.

If the new House Democrats decide to spend 2019 launching needless investigations into the White House, Trump has his own plan.

He threatened to make public all the information about Obama’s wiretapping of Trump Tower during the 2016 presidential campaign — and what Trump said that what these documents contain is shocking.

Before the election, House Minority Speaker Nancy Pelosi claimed to have a “hit-list” of 85 investigations that Democrats were planning to use to grind the Trump administration to a halt.

Instead of governing and growing the economy, Trump and his team would be stuck answering an endless stream of subpoenas and legal requests.

Conservative lawmakers called the plan “stomach churning” and warned voters that giving Pelosi control of the House would unleash “chaos” in 2019. Still, Pelosi won — and may even retake her speaker seat.

In typical Trump fashion, the president went on the offensive — and warned that Democratic lawmakers weren’t ready to pay the “heavy price” that a slug-fest with the Oval Office would cost.

Trump even challenged them to try.

“If they go down the presidential harassment track, if they want go and harass the president and the administration, I think that would be the best thing that would happen to me,” Trump said in an interview with The New York Post. “I’m a counter-puncher and I will hit them so hard they’d never been hit like that,”

The documents would expose that the FBI, Obama’s Justice Department, and the failed presidential campaign of Hillary Clinton all conspired against Trump during the election, he said.

“I think that would help my campaign. If they want to play tough, I will do it,” Trump said. “They will see how devastating those pages are.”

A group of Republican lawmakers, led by New York Rep. Lee Zeldin, asked Trump to declassify the documents in September. They claimed at the time the information would undermine the legitimacy of Mueller’s investigation, which Trump has repeatedly called a political “witch hunt.”

But the president said he was holding onto the documents as a defensive tactic to discourage Democratic lawmakers from using the “legal hell” tactic post-election.

“It’s much more powerful if I [release the documents] then. Because if we had done it already, it would already be yesterday’s news,” Trump told The Post.