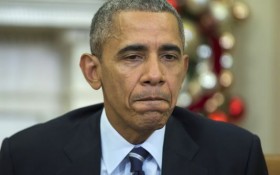 Since taking office, Trump has torn apart Obama’s shaky legacy, leaving Obama “furious” and “livid.” Trump has made Obama look bad by slashing regulations that destroyed the U.S. economy. And Trump has taken down multiple Deep State leakers that were undermining the effort to ‘drain the swamp’ of Obama loyalists.

Now, Obama just got the worst news of all.

It turns out that Trump is as popular as Obama was after one year, despite the mainstream media’s full court attack.

Matt Drudge of The Drudge Report also reported an amazing find — one that will leave liberals and their media cronies stunned.

Rasmussen Poll shows Trump at 46% APPROVE this morning, with 53% DISAPPROVE…

Is this tiny marine animal the link to the “fountain of youth”? [sponsored]

For someone as concerned about his legacy as Obama was, it must hurt seeing Trump’s approval ratings rise… especially without the media’s help.

Who is a better president?