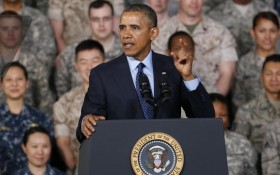 The U.S. military is the most feared fighting force on the planet. But it would appear that President Barack Obama’s administration is doing all it can to turn these tougher-than-nails warriors into soft marshmallows.

Reports have surfaced that the Obama administration is pushing an out-of-control politically correct training program on soldiers that is hurting military readiness and morale — and it is threatening to divide our troops along racial and gender lines.

At one session last year at Fort Gordon in Georgia, soldiers were forced to sit through a lecture on “white privilege” where they learned it doesn’t matter what social class you come from.

If you’re a straight white male, doors magically open for you, which results in “suffering and deprivation” for someone else in return.

Yes, it seems that instead of being trained to hate our enemies, our soldiers are being taught to hate the different races they serve with!

“Outrageous — that is the only word to describe this type of raw racist indoctrination,” Tom Fitton, president of government watchdog Judicial Watch, said in a news release. “The Obama administration undermines the morale of our military with morally repugnant ‘equal opportunity training’ that makes many soldiers feel unwelcome because they are the wrong sex, race, religion or aren’t part of a politically correct group.”

A few details of the session leaked out last year and were immediately downplayed by the military brass.

But Judicial Watch just obtained the shocking details of the full presentation via a Freedom of Information Act request. The 400 soldiers of the 67th Signal Battalion were forced to listen to the story of a hypothetical black woman from Africa who had no idea what racism was until she moved to the United States.

She didn’t even think of herself as “black” until she arrived in America.

“She only became ‘black’ when she came to the U.S. where privilege is organized according to race, where she is assigned to a social category that bears that name and she is treated differently as a result,” a slide from the presentation reads.

The training session is part of a troubling pattern these past seven years in which tradition is being tossed out the window in the name of political correctness.

Last year, the Army refused to provide an Honor Guard to a church in Georgia celebrating Independence Day. The brass claimed it would violate church and state… but the Army had previously provided the Honor Guard for decades.

ROTC cadets have been made to wear high heels on campuses around the country, and told they’re doing so to raise awareness for sexual assaults.

In another incident exposed by Judicial Watch, the United States Air Force Academy was caught using voluntary funds from cadets of faith to put on worship services featuring witchcraft, “Faery Magick” and voodoo.

No doubt, at least some of those services – if not all of them – were really conducted by and for atheists, who often demand “equal time” for ridiculous beliefs just to make a political point.

And in bases around the world, men are being forced to do their physical training in “pregnancy suits” so they know what pregnant women are going through.

In some cases, it seems to have backfired.

“This whole thing is pretty uncomfortable,” said Sgt. Michael Braden, a hardened combat vet of Iraq, Afghanistan and Kosovo, when he described the suit he had to wear to Stars and Stripes. But, “body armor is a lot heavier.”

The goal of military training and events should be to ensure the safety of the American people and the readiness of our combat troops to protect the nation and our Constitution should they be called upon to serve in times of war.

None of these increasingly bizarre incidents serve those goals –– but they do serve another agenda: the politically correct agenda of the left, and that could end up hurting us down the road.