Obama EXPLODED in rage when Trump said.... - The Horn News 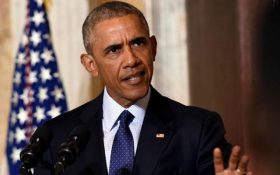 Former President Barack Obama is having a very bad Friday — because President Donald Trump is about to drop a legal hammer.

Critics say all signs point to Obama — and the move accelerates the investigation into the illegal surveillance of the Trump 2016 presidential campaign.

Trump directed the intelligence community to “quickly and fully cooperate” with Barr’s probe. The directive marked an escalation in Trump’s efforts to “investigate the investigators.”

Press Secretary Sarah Huckabee Sanders said in a statement that Trump is delegating to Barr the “full and complete authority” to declassify documents relating to the probe, which would ease his efforts to review the sensitive intelligence underpinnings of the investigation.

Barr has already asked John Durham, the U.S. attorney in Connecticut, to examine the origins of the Russia investigation to determine whether intelligence and surveillance methods used during the probe were lawful and appropriate.

Barr has also been directly involved, according to a person familiar with the matter who was not authorized to discuss it publicly, and is also working with CIA Director Gina Haspel, Director of National Intelligence Dan Coats and FBI Director Christopher Wray.

Trump is giving Barr a new tool in his investigation, empowering his attorney general to unilaterally unseal documents that the Justice Department has historically kept close to the chest. Warrants obtained from the Foreign Intelligence Surveillance Court, for instance, are not made public — not even to the person on whom the surveillance was authorized.

Trump explicitly delegated Barr with declassification power — noting it would not automatically extend to another attorney general — and only for use in the review of the Russia investigation. Before using the new authority, Barr should consult with intelligence officials “to the extent he deems it practicable,” Trump wrote in a memo formalizing the matter.

For years, critics have complained that Obama’s “spying” on Trump’s campaign was being swept under the rug.

Finally, voters are poised to get the answers they’ve demanded.

Despite Mueller finding no evidence of collusion with Russia, his report documented extensive Russian efforts to interfere in the 2016 campaign.

Typically, the Office of the Director of National Intelligence coordinates declassification work by contacting various agencies where classified material originated to get their input on what should be released or not disclosed based on legal exemptions. The president, however, has the authority to declassify anything he wants.

“Today’s action will help ensure that all Americans learn the truth about the events that occurred, and the actions that were taken, during the last Presidential election and will restore confidence in our public institutions,” Sanders said.