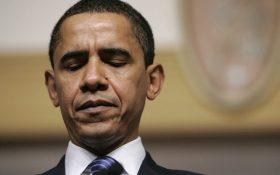 Fox News’ Sean Hannity dropped a bombshell on former President Barack Obama and his political allies – and it has Democrats throughout Washington, D.C. in a full-blown panic.

Attorney General William Barr has been quietly investigating the Obama administration’s “spying” on Donald Trump’s presidential campaign in 2016 for weeks – or maybe months.

The news has top Obama insiders turning on each other — and Hannity says new evidence has already linked the investigation straight back to Obama’s former FBI Director, James Comey.

U.S. Attorney John Durham’s investigation into the wiretapping and spying against Trump is the “boomerang” that conservatives have been calling for, Hannity said.

“Durham is a nonpartisan, career U.S. attorney that specializes in uncovering corruption at the highest points of our government,” Hannity said. He pointed out that Durham has arrested dozens of corrupt officials and FBI agents throughout his career.

“The Deep State is in deep trouble,” Hannity said at the start of his program.

Hannity explained how various Obama insiders have begun blaming each other for the mistakes.

Former anti-Trump FBI Agents Lisa Page and Peter Strzok have gone public and blamed Obama’s Attorney General Loretta Lynch for the “rigging of the investigation into Hillary Clinton and her email servers and obstruction of justice.”

A former top Department of Justice official under Obama, Bruce Ohr, “is blaming DOJ and FBI officials for ignoring his warning about [former British spy] Christopher Steele and the dossier.”

Former Deputy Director of the FBI Andrew McCabe, meanwhile, is “anyone pretty much with a pulse.”

“It’s crisis mode for the Deep State, and at the moment it’s every man, every woman for themselves,” Hannity said. “Even Comey’s former General Counsel at the FBI, James Baker – he’s trying to get ahead of this story by admitting [Inspector General Michael] Horowitz is going to uncover some ‘major’ mistakes in the FISA process. Ya think?”

Baker went on CNN recently, where he explained that it was certain Inspector General was going to find mistakes – but he hoped the IG would be merciful and not prosecute the errors.

That’s when Hannity dropped the bombshell – and it could mean big trouble for Obama, Comey, and anyone involved in the so-called “Spygate.”

“There is now growing evidence tonight that Comey knew full well that Steele was completely unreliable,” Hannity told his viewers. “A brand new report … [from The Hill] showed that a State Department official, Kathleen Kavalec, did, in fact, inform a high ranking official at the FBI about her meeting with Steele … as many as 10 days before [first FISA] warrant … was submitted in 2016.”

Hannity is referring to a report by The Hill’s investigative reporter John Solomon, who broke the story Tuesday.

According to the report, an email questioning Steele’s motives was sent to Special Agent Stephen Laylock by Deputy Assistant Secretary of State Kathleen Kavalec – and it “arrived eight days before the FBI swore to the Foreign Intelligence Surveillance Court that it had no derogatory information on Steele and used his anti-Trump dossier to secure a secret surveillance warrant to investigate Trump’s possible ties to Moscow.”

The report says that oath was a lie.

“Officials tell me that Laycock immediately forwarded the information he received about Steele on Oct. 13, 2016, to the FBI team leading the Trump-Russia investigation, headed by then-fellow Special Agent Peter Strzok,” Solomon wrote.

Kevin Brock, the former FBI assistant director for intelligence, told The Hill that this act by the Obama administration wasn’t just a small oversight.

It was a big deal.

“This is quite important,” Brock said. “Under normal circumstances, when you get information about the conduct of your source that gives rise to questions about their reliability or truthfulness, you usually go back and reevaluate their dependability and credibility.”

Hannity invited Solomon to his show to discuss – and what they said was jaw-dropping.

You can watch the full segment here –