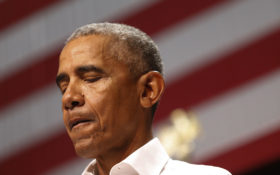 In his speech, Obama said voters that chose Trump were empowering “bigots” and “fear-mongers.” He also dismissed the Benghazi terror attack as nothing but “wild conspiracy theories.”

Trump needed just nine words for a comeback — and it left supporters cheering.

“I’m sorry,” Trump told supporters. “I watched it, but I fell asleep.”

Obama’s speech at the University of Illinois at Urbana-Champaign was delivered less than two months before midterm elections that could determine the course of Trump’s presidency.

“It did not start with Donald Trump,” Obama said. “He is a symptom, not the cause. He’s just capitalizing on resentments that politicians have been fanning for years.”

Noting the history of former presidents avoiding politics, Obama acknowledged his attack of Trump was a departure from tradition.

“Appealing to tribe, appealing to fear, pitting one group against another, telling people that order and security will be restored if it weren’t for those who don’t look like us or don’t sound like us or don’t pray like we do — that’s an old playbook,” Obama said. “It’s as old as time. And in a healthy democracy, it doesn’t work. Our antibodies kick in and people of good will from across the political spectrum call out the bigots and the fear-mongers and work to compromise and get things done and promote the better angels of our nature.”

But, Obama added, when there is a vacuum in democracy, “other voices fill the void. A politics of fear and resentment and retrenchment takes hold.”

Trump had a simple response that voters loved: He said he fell asleep watching Obama’s speech.

“I found he’s very good for sleeping,” Trump said at a campaign appearance in Fargo, North Dakota. He said Obama was trying to take credit for this “incredible thing that’s happening to our country.”

Obama also spent a large portion of his speech trying to claim credit for the recent economic recovery.

“When you hear how great the economy’s doing right now, let’s just remember when this recovery started,” he said.

On Saturday, the former president went to stump for House Democratic candidates at an event in Orange County, California.

Only 750 people showed up in support.

Obama’s campaign activity will continue through October and will include fundraising appearances, according to an Obama adviser. The adviser was not authorized to discuss Obama’s thinking publicly and spoke on condition of anonymity. While the former president will be visible throughout the general election, the adviser said Obama will not be a daily presence on the campaign trail.

“In 2016, voters rejected President Obama’s policies and his dismissiveness towards half the country,” Republican National Committee spokesman Michael Ahrens said in response to the Friday speech. “Doubling down on that strategy won’t work in 2018 either.”