[Warning] Obama demands $200 from every American - The Horn News 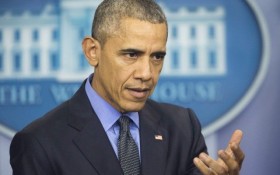 President Barack Obama wants oil companies to pay a $10 fee for every barrel of oil to help fund investments in clean transportation that fight climate change.

And his massive cash grab is going to leave Americans on the hook for billions.

According to the American Petroleum Institute, it is projected that the fee would raise the cost of gasoline by 25 cents a gallon for consumers.

Critics say that — assuming each American fills a 15 gallon tank of gas each week — this new cost means Obama’s oil tax would take about $195 out of every American wallet annually.

Obama will formalize the proposal Tuesday when he releases his final budget request to Congress. The $10-per-barrel fee is expected face solid opposition from Republicans who control Congress and oppose new taxes and Obama’s energy policies.

“The president should be proposing policies to grow our economy instead of sacrificing it to appease progressive climate activists,” the Wisconsin Republican said in a statement.

“At a time when oil companies are going through the largest financial crisis in over 25 years, it makes little sense to raise costs on the industry,” added Neal Kirby, a spokesman for the Independent Petroleum Association of America. “This isn’t simply a tax on oil companies, it’s a tax on American consumers who are currently benefiting from low home heating and transportation costs.”