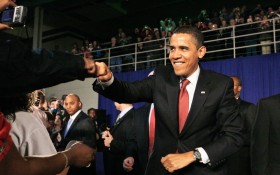 President Barack Obama has been caught red handed – Obama and Iran’s foreign minister shook hands when they ran into one another on the sidelines of the U.N. General Assembly in New York, an unprecedented gesture that has US lawmakers upset. This comes just weeks after Obama’s unpopular Iran nuclear deal was forced through Congressional approval, and it has conservatives angry at the President.

Republicans are furious that the handshake is another move by Obama to cozy up to the Iranian theocracy hard-liners, which has for years been at odds with US foreign policy.

Iranian hard-liners even took time from their shouts for “Death to America” to also state they were bothered by the handshake.

A White House official, speaking on grounds of anonymity because the official was not authorized to speak publicly, confirmed Tuesday that “there was a brief interaction at the luncheon, where they shook hands.”

It represented the first handshake between an American president and Iran’s top diplomat since the 1979 Islamic Revolution ousted a pro-Western monarchy in Iran. The two countries have had no diplomatic relations since then.

Obama and Iranian President Hassan Rouhani spoke over the phone as Rouhani was leaving the U.N. in 2013 after his presidential debut at the General Assembly.

The IRNA report insisted the encounter was not planned. Iranian state TV said it transpired in “less than a minute” and that the U.S. Secretary of State John Kerry also introduced two of Zarif’s deputies who were there to Obama.

“The foreign minister (Zarif) has committed a very bad action and he has to apologize to the great Iranian nation,” Mansour Haghighatpour, a member of parliament’s committee on national security and foreign policy, told the semi-official Fars news agency.

His committee colleague, Mohammad Hassan Asafari told The Associated Press that there should be an “investigation to see what the case was.”