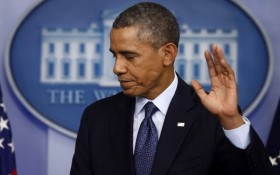 When announcing his unilateral and likely unconstitutional executive orders on gun control Tuesday, a tearful President Barack Obama said it was the nation’s responsibility to prevent the next mass shooting.

The only problem? Any assertion that Obama’s gun control measures could have prevented — or will prevent — mass shootings is simply not true.

According to an investigation by the Associated Press, the gun control orders Obama announced would have done nothing to prevent some of the deadliest mass shootings in recent history. And that includes the slaughters of 20 first-graders at Sandy Hook Elementary School in Newtown, Connecticut, or 14 county workers at a holiday party in San Bernardino, California.

It also adds more than 230 examiners and staff to help process background checks and calls on states to submit accurate and updated criminal history data.

Those measures are seen as crucial to stemming gun suicides — the cause of two-thirds of gun deaths — by blocking immediate access to weapons. But, the Associated Press review shows, they would have had no impact in keeping weapons from the hands of suspects in several of the deadliest recent mass shootings that have spurred calls for tighter gun control.

Here’s a look at how some recent mass shooting suspects got their weapons:

Syed Farook and his wife used weapons that the FBI says his neighbor, Enrique Marquez, purchased legally from a federally licensed dealer in 2011 and 2012. Marquez, now facing conspiracy and other charges, told investigators that Farook asked him to purchase the weapons because he would draw less attention. At the time, the FBI says, the men were plotting to shoot up a community college and a highway.

Christopher Harper-Mercer and his family members legally purchased the handguns and rifle he used in the Umpqua Community College shooting from a federally licensed gun dealer, according to the Bureau of Alcohol, Tobacco, Firearms and Explosives.

The FBI says some of the weapons Muhammad Youssef Abdulazeez used in his attack on a pair of military facilities were purchased legally and some were not. It is unclear when the purchases were made and whether he was subject to a background check. Relatives say Abdulazeez had a history of mental illness, made a series of overseas trips and was arrested in April on suspicion of driving under the influence of alcohol. In May 2013, he failed a background check for an engineering job at a nuclear power plant in Ohio.
Sept. 16, 2013, Washington, D.C., 12 killed

Aaron Alexis, a former reservist turned civilian contractor, passed state and federal background checks and legally purchased the pump-action shotgun used in the Washington Navy Yard shooting despite a history of violent outbursts and recent mental health treatment. Alexis was accused of firing a gun in anger in Texas in 2004 and Seattle in 2010, but was not prosecuted in either case. In 2011, he received an honorable discharge despite bouts of insubordination, disorderly conduct and unauthorized absences. None of that would have disqualified him from purchasing a weapon.

Adam Lanza used his mother’s weapons, including a .223-caliber semi-automatic rifle, in the massacre at Sandy Hook Elementary School. Investigators say Lanza’s mother, whom he fatally shot before going to the school, also purchased the ammunition.

James Holmes was receiving psychiatric treatment when he passed required federal background checks and legally purchased the weapons he used in the movie theater assault. As in the Navy Yard case, Holmes’ treatment alone would not have disqualified his purchases. They would have been blocked if had he been adjudicated as a mental defective or committed to a mental institution.