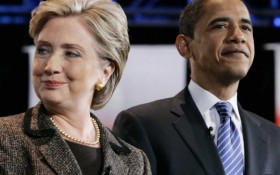 It’s been well documented that President Barack Obama and former Secretary of State Hillary Clinton are not the best of friends. But as Democratic establishment figures, they seem willing to do just about anything to protect each other from legal harm.

And now the Obama administration is keeping under wraps a number of draft criminal indictments targeting Clinton.

In fact, the Obama administration seems willing to do everything in its power to keep the content of these indictments from ever going public — including fighting for Clinton in court.

The Clinton indictments, all drafts, involve older allegations that she withheld evidence from federal investigators to conceal her role in the Madison Guaranty Savings & Loan scandal, which involved an Arkansas financial company whose collapse lead to multiple criminal convictions.

Clinton represented Madison Guaranty as an attorney at the Rose Law Firm. Critics say she illegally misused her position to profit while there, but she ultimately avoided indictment for her involvement.

Draft indictments over the scandal were drawn up, and the political watchdog group Judicial Watch has filed a Freedom of Information Act lawsuit to expose them publicly.

But they’ve been stonewalled by the Obama administration at every turn. The National Archives and Records Administration is refusing to release the information.

According to the Obama administration, the indictments are too personal — and Clinton’s right to privacy is more important than the public’s right to know what’s in the draft indictments.

“While there may be a scintilla of public interest in these documents since Mrs. Clinton is presently a Democratic presidential candidate, that fact alone is not a cognizable public interest under FOIA, as disclosure of the draft indictments would not shed light on what the government is up to,” the National Archives said in a statement.

The Obama administration’s move has critics furious — especially because the public has a right to know how close a presidential candidate came to facing criminal charges and possibly jail time.

“It is absurd for the Obama administration to argue that Hillary Clinton’s privacy would keep a draft indictment from the American public,” said Judicial Watch president Tom Fitton in the group’s press release.  “One can’t help but conclude that the Obama administration is doing a political favor for Hillary Clinton at the expense of the public’s right to know about whether prosecutors believed she may have committed federal crimes.”