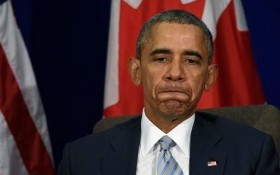 Intelligence analysts have repeatedly accused the Obama administration of pressuring them to write inaccurate reports claiming the war against ISIS is going better than it is.

Now the administration has been caught in its latest Middle East lie. Claims that Iran is drawing down its presence in Syria don’t just appear to be untrue — they appear to have been fabricated out of thin air.

The Obama administration, through Secretary of State John Kerry, assured the American people earlier this year that Iran was slowly removing its elite fighting force from Syria. This was part of an effort to allay fears that Tehran is using its powerful Islamic Revolutionary Guard Corps in Syria to strengthen its influence across the Middle East.

Iran’s territorial ambitions have been an embarrassment for the Obama administration, which has been under repeated fire for its push to foster closer ties with Iran.

Yet the Iranian government said Monday it has dispatched even more commandos to the war, directly contradicting the administration’s claims.

Kerry, who is deeply involved in trying to broker a political solution to end the five-year-old civil war between President Bashar Assad and rebels, told Congress in late February that Iran was recalling its IRGC forces from Syria.

“On Iran, let me just inform everybody here that the IRGC has actually pulled its troops back from Syria,” Kerry told the House Foreign Affairs Committee. He said Iran’s supreme leader Ayatollah Ali Khamenei “pulled a significant number of troops out. Their presence is actually reduced in Syria.”

However, on Monday Iran’s semiofficial Fars news agency quoted Gen. Ali Arasteh, deputy chief liaison of the Iranian Army’s Ground Force, as saying that the Iranian army is continuing to escalate the number of commandos in Syria.

Plus, the pro-Iranian Shiite militias Tehran helped create are still fighting. Iran stepped up its fighting in Syria in October 2015, sending mainly IRGC officers to direct Shiite foot soldiers from other nations, including Iraq, Afghanistan and Pakistan.

“They don’t want to just build up their militia groups and leave. This is their way of creating a lasting footprint” across the region, he said. “This isn’t Russia where they make sure to shore up Assad and then they downsize.”

Amir Ali Hajizadeh, the head of the IRGC’s aerospace division, told reporters on March 9 that Iran is still deploying troops to Syria.

Iran was training, advising and assisting Syrian forces through September of last year, but stepped up its activity a month later after Russia began its air campaign. It’s unclear exactly how many Iranians are fighting in Syria, but Iranian deaths rose significantly in mid-October with reports that 1,500 more Iranian troops had been deployed to Syria, according to a new report by the Critical Threats Project at the American Enterprise Institute, a conservative-leaning policy institute in Washington.

Reports surfaced last year that Iranian forces were pulling out of Syria.

But “it is more likely that the IRGC was rotating and repositioning its units, however, for casualties began to pick up again in early December,” said Frederick Kagan who wrote the report with Paul Bucala.