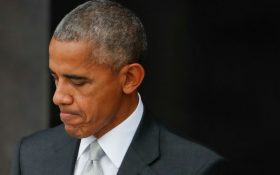 It’s obvious that President Barack Obama has been doing everything in his power to ensure Democractic presidential candidate Hillary Clinton wins in November — even if it means lying.

Recently released FBI documents reveal Obama betrayed and lied to straight in the faces of the American citizens he supposedly serves, all to protect Hillary.

The president claimed he didn’t know anything about Clinton’s questionable use of a private email server, but recent reports show Obama was actually using a pseudonym to communicate with his former secretary of state through her personal email address.

The FBI released nearly 200 pages from the investigation into Clinton on Monday, and notes from the interview with Clinton aide Huma Abedin are damning for the president.

During the April 5th interview, Abedin was presented with an email exchange from June 28th, 2012 with the subject line “Re: Congratulations.” Abedin claimed she was unfamiliar with the name of the sender, but when informed it was believed to be a pseudonym for the president she responded, “How is this not classified!?”

The revelation of Clinton’s communication with the president shows exactly how much respect Obama has for the American people. He clearly cares more about defending his potential predecessor than upholding his promise of transparency.

Obama told CBS News on March 7th, 2015 that he had learned about Clinton’s personal email account through news reports, adding, “The policy of my administration is to encourage transparency, which is why my emails, the Blackberry I carry around, all those records are available and archived.”

The fact that he could blatantly lie and stress the importance of transparency all in one breath is laughable… and, more importantly, proves that these two power hungry snakes will say and do anything to remain in control.

The State Department is refusing to make any emails between Obama and Clinton public, citing the “presidential communications privilege”. It can be assumed that the congratulations email was in regards to the Supreme Court’s ruling that day upholding an important portion of Obamacare.

Other documents included in the FBI’s release paint an image of Clinton as out of touch senior with little to no technical knowledge.

The FBI’s write-up following the Abedin interview claimed, “she could not use a computer”, while the interview with aide Monica Hanley showed Clinton had no idea what her email password was.

Hanley also revealed she had lost a thumb drive which contained all of Clinton’s emails, a national security risk that should not be taken lightly.

These released FBI records expose the overflow of devious, disorganized, inept individuals Clinton surrounds herself with.

Are these the people we want back in the White House next year?