Obama to blame for Russian-backed Aleppo slaughter - The Horn News 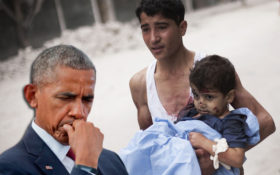 The Battle of Aleppo came to a close Tuesday as the final rebel-held areas in the city fell to pro-government, Russian and Iranian-backed forces.

But the human rights horrors and tragedies that occurred in the bloodiest battle of Syria’s civil war are just starting to come out – and the bloodshed is the fault of President Barack Obama’s failed foreign policy.

Syria’s anti-government rebel forces are facing final defeat by Iranian and Russian-backed forces of brutal Syrian dictator Bashar al-Assad, and reports are streaming out of that the leash has been let off the strongman’s forces.

In the collapsing areas previously held by rebel forces, stories of the brutal treatment of civilians are starting to filter out through social media.

Thousands of innocent people remain trapped in rebel-held neighborhoods, and they are begging the world for help… because they know what’s in store for them.

According to humanitarian groups, children are being burned to death and women are committing suicide to avoid rape — tragedies that should have been prevented if Obama had an effective foreign policy.

Instead, months of White House hand-wringing and indecisiveness let the Syrian civil war spiral out of control. It opened a window for ISIS to be born, and the Obama administration watched as these Islamic terrorists destroyed the years of progress and stability hard earned by U.S. forces in the region under President George W. Bush.

The tragedy in Aleppo is on Obama’s shoulders. He should know that when he has to look at himself in the mirror every morning – the trail of blood, rape, and the burning alive of innocent civilians is because of him.

In an effort to cover his legacy from the scars left by ISIS’ bloody jihad, Obama was consistently complacent with Assad and Putin while the two vicious dictators desecrated a nation. Their pro-government forces bombed hospitals, aid convoys, civilian homes, and shops at will.

Both Putin and Assad have clearly lied to Obama in the past about their intent to fight ISIS in Syria, and when their lies were proven, Obama failed to act.

In 2012, Obama warned Assad that if he were to use chemical weapons against his people, America would be forced to intervene. Following that speech, Assad used chemical weapons on multiple occasions, slaughtering mass amounts of civilians, and Obama did nothing.

In 2015, Russian officials were dropping airstrikes across Syria in an alleged attempt to take out ISIS, but barely any of their airstrikes actually targeted ISIS. Instead, Putin was dropping bombs on increasing amounts of innocent civilians, embolden by America’s non-response.

Obama’s anti-Colonialist attitude committed America early on to avoid intervention, something likely unfathomable to his predecessors.

He proved he is a spineless coward too afraid to intervene in what has been one of the worst cases of mass carnage the world has ever seen.

In the final days of the battle, horrific reports of bloodshed and clear human rights violations have flooded in from multiple sources.

The United Nations reported, “Syrian troops or allied Iraqi militias were gunning down families in apartments and on the streets, with the toll reaching 82 civilians,” according to The New York Times.

French Foreign Minister Jean-Marc Ayrault described the scene to the Times as, “coldblooded murders of entire families on the ground who were deemed close to the opposition; summary executions, including women and children; people burned alive in their homes; the continuation of systematic targeting of hospitals, their staff and their patients,” according to Breitbart.

The Union of Medical Care and Relief Organizations released images of dead children lined up in the street, who were reportedly killed in a chemical weapons attack in which an odorless, colorless gas was released during airstrikes. The charity reported 93 deceased and more than 300 injured, according to the Daily Mail.

The blood of Aleppo’s women and children is on Obama’s hands, whether he wants to admit it or not.

Even the Obama administration recognized the “depraved tactics” of Assad in a White House press conference, but defended the president’s lack of response.

Press Secretary Josh Earnest spoke to reporters Wednesday, condemning the horrific acts in Aleppo and Russia for continuing to offer its support. He claimed the administration is “deeply concerned” about the disgusting military tactics of the pro-government forces “aided and abetted by the Russians and Iranians.”

The powers in Syria had agreed to a cease-fire on Tuesday, which predictably fell apart by Wednesday, similar to cease-fires in the past. Earnest touted the amount of aid Obama has provided to the nation, ignoring the fact that these people needed help for years beforehand.

The slaughter in Aleppo was totally avoidable, but totally predictable.

Obama has had the opportunity to intervene in the mass civilian casualties since 2011, but has stood by as the death toll has grown.

His lack of authority allowed Russian and Iranian-backed forces to take over an entire region, slaughtering women and burning children alive. His complacency is horrific, weak, and the opposite of what America as a nation stands for.

It’s time takes responsibility for the lives lost on his hands.