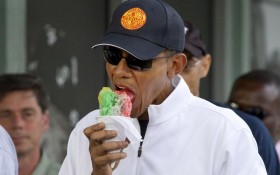 President Barack Obama is preparing to soak up the sun and fun during his annual Hawaii holiday vacation — a trip that’s going to cost taxpayers millions.

The White House says Obama will hold his traditional year-end news conference on Friday afternoon. Then the president will depart for San Bernardino, California, where he plans to meet with families of the 14 victims of the recent mass shooting.

The California stop will be Obama’s last before he travels to Hawaii to spend Christmas and New Year’s with his family. Obama has vacationed in Hawaii every year since taking office.

According to reports, this year’s trip to Hawaii will cost taxpayers an estimated $3.7 million, which, believe it or not, is cheaper than some previous trips. According to estimates from Judicial Watch, the Obama 2012 Christmas vacation cost taxpayers nearly $4.1 million.

If these two years are applied as the average range for these luxurious trips, that means the Obamas have, in total, billed U.S. taxpayers around $30 million during seven years in office on Hawaii trips alone.