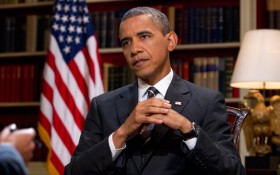 The U.S. Department of Education – under the guidance of President Barack Obama appointee Arne Duncan – said Monday that a suburban Chicago school district is violating the rights of a transsexual student by refusing to allow the biologically male student unrestricted use of a girls’ locker room. The student identifies as female.

The district had proposed a compromise that would allow access to the women’s locker room and showers to the student, who was born male, but required the student to change and shower in a separate area.

The student, with the assistance of the American Civil Liberties Union, rejected the compromise offer and filed a federal complaint against Illinois’ Palatine Township School District 211, demanding unrestricted access to the women’s locker room.

District 211 now has 30 days to change the policy, or risk losing millions in federal funding.

The superintendent for the school district, Daniel Cates, said in a statement the district does not agree with the department’s stance.

The policy the department “seeks to impose on District 211 is a serious overreach with precedent-setting implications,” Cates said. “District 211 continues to believe that what we offer is reasonable and honors every student’s dignity.”

The district will continue to have settlement negotiations with the Education Department and is “prepared to engage in all avenues of due process to determine whether our position of honoring the rights of all the students is within the law,” Cates said.

ACLU lawyer John Knight said the complaint against the school district was filed two years ago, noting the student then had to dress for gym in a restroom. Knight said that when in the girl’s locker room, his client is required to use a privacy curtain, which is not required for other girls – so it is offensively shaming